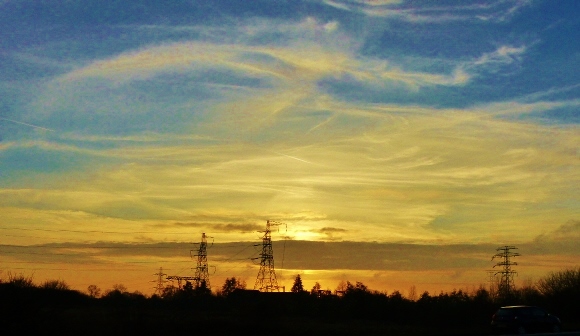 Having done all my Christmas shopping I could sit around all day today, except when back in my bed of course.  The watching people hurtle past the window on their way to work was tiring me so I slept it off.  Later I trundled round on my rusty bike to see my friend at the far reaches off town.  On the way back I stopped on the extremely high bridge I had to cycle, puffing and panting, over and stopped and attempted to capture the bright yet dying sun.  I was intrigued to find how even the electricity pylons look better when the sun shines.  It is true that sunshine makes everything nicer, no matter what time off day.  There is also not much else to look at round that part of the area!
For some reason the gale force wind has dropped, except when I am cycling as it always faces me, and the sky became clear as the rain clouds passed away in the afternoon.  Considerable heavy rain fell up north and the Carlisle United manager claimed the floodwaters were up to the crossbar on the goalmouth, that's eight feet high you realise, and others have once again found their houses flooded, we can consider ourselves fortunate to live in the 'soft south.'  David Cameron, who's government failed to pay for the complete flood defences newly installed (they were overwhelmed) paid a visit for some PR.  The natives must have been pleased.
Whatever the cause the climate is changing, high flood waters from heavy rain alongside mild Decembers are not the normal run of things.  Certainly snow fell in Scotland but it used to begin in August!  Just be glad you do not live in a sinking South Sea Island, no paradise for them these days.
With my Xmas work complete I sit here awaiting the parcels flooding in, one card arrived today, one parcel promised, hundreds expected! 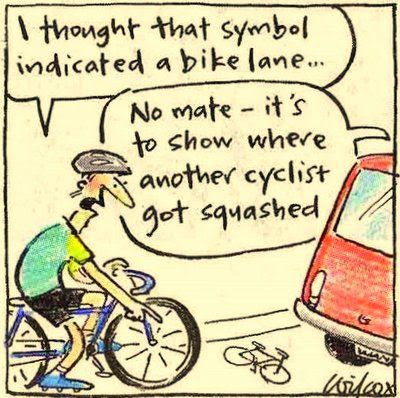 Yes my rusty old steed got me down to my mates in record slow time, the remains of the gales were against me.  How nice it was to feel the pains in the knee as I raced slowly up the Eiger like slopes that were in the road, how much nicer to know later that I was almost home when the aches became screaming pains.  However I am now so fit I will be unable to go to work tomorrow!  There in spite of the knees stiffening i will keep smiling and being a light to the world.
The bike however will be resting. 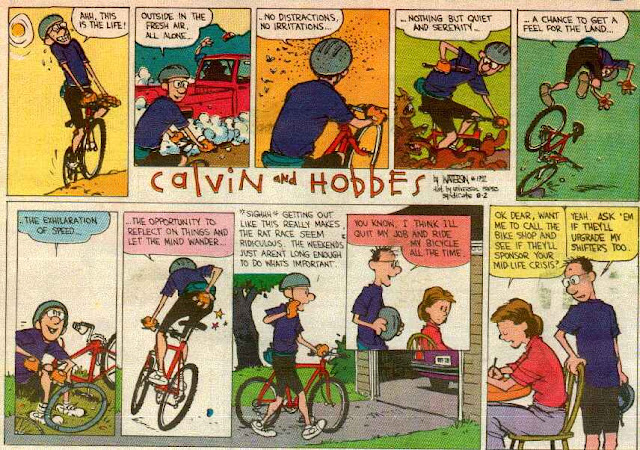 I hurt just thinking about all that pedalling!

I so agree about sunshine. It really has an effect on my mood. I don't know how people stand living in dark apartments and dark houses. Maybe they go round poisoning each other. Lovely shot of the pylons. I think there is a lot of beauty in those pylons, they were carefully designed in the 1930s not just riveted together by engineers who needed something to hang their wires on.

By the way I've been clearing out my stuff and found an interesting little leaflet from Braintree Council. Its called "The Story of the "Lyon"" This was a ship which sailed out to America in 1632. Samuel Goodwin of Lyons Hall near Bocking formed something called the Braintree Company which consisted of Puritans seeking freedom of worship. The leaflet has the names of the people who came from Braintree and Bocking, Boxted, Bures, Castle Hedingham, Fairstead or Leighs, Dedham. You probably know all about it anyway and they probably sell the leaflet in the museum but anyway I just thought I would mention it, it's always interesting to think of people living in the same place as us but living such very different lives, isnt it?

Lee, My knees are still thinking about the pedalling.

Jenny, I love the thought of them poisoning one another! The old pylons are good but new one will be more modern styling.

Jenny, Ah yes the 'Lyon.' We did have a book on that, sold out now, and we found one of those (green?) leaflets. I need to see if we can put together something about the ship as we have no more left and many Americans come in looking for their ancestors and the houses they lived in. Some times they find them!

The leaflet I have is beige. Might have faded with time I suppose but I don't think so. I would guess you must have some lying around somewhere, some member of staff put a bit of work into them, although they are not very long.

Jenny, Never seen a beige one. If I get time I will try and rewrite a new one, sometime before Spring!