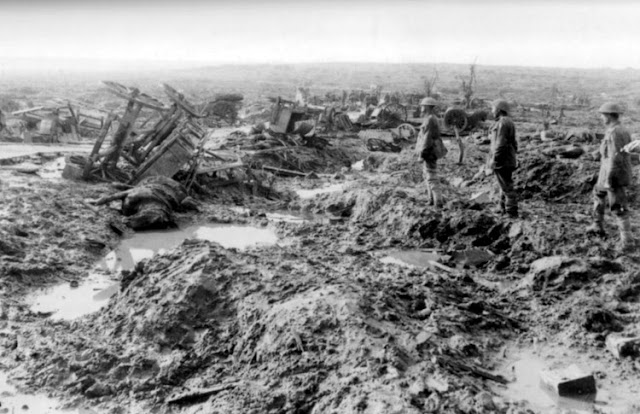 ‘The Battle of Passchendaele’ was the last battle of the
1917 battle knownmore correctly as
‘The Third Battle of Ypres.’

To stem the German advance during 1914 the British army held a salient around the Belgian town of Ypres with dogged determination in the knowledge that losing the town would allow the German army to capture the ports of Dunkirk and Calais and possibly put Britain out of the war.  Such British determination during the ‘First Battle of Ypres’ cost the Germans dear with over a hundred and fifty thousand casualties.  The ‘Second Battle of Ypres’ during April and May 1915 in which the Germans advanced making the first use of Chlorine Gas also failed costing the Germans also large numbers of casualties.  The British however were left defending a salient in which the ridges of higher ground to the south and east were held by the German army allowing the enemy to observe all movements in the salient and pour artillery and machine gun fire into the occupied area thus making movement during the day impossible and life hazardous.
During 1915 the then Commander in Chief of the British forces Sir John French had wished to mount an operation in the Ypres area but was dissuaded by the war cabinet in London who were in admiration of the French generals and ordered instead to follow the French lead and attack at Loos.  This London order led to the loss of many casualties yet led to Sir John French being replaced by General Sir Douglas Haig.  Haig also wished to fight at Ypres during the 1916 offensive but was again instructed by London to follow the French lead and fight at the unsuitable Somme area.  By 1917, with Admiral John Fisher despairing due to the success of the German ‘U-boat’ fleet in sinking merchant vessels Haig reintroduced the idea of fighting at Ypres to free the Belgian coast and reach the submarine pens at Ostend.  This required victory over the higher ground around Ypres, reaching the railway at Roulers and disrupting the German supply system, so the ‘Third Battle of Ypres’ was launched.
The Battle of Messines fought by General Plumer’s Second Army between the 7th and 14th of June had been an outstanding success but the momentum was lost due to the logistical difficulties in transferring artillery and preparing men before the main attack of the battle at Pilkem Ridge began on July 31st.

The higher ridges to the east of Ypres had to be taken individually.  Normal weather patterns may well have enabled a success in a battle lasting only a few weeks however the unusually heavy rainfall in August plus determined defending by the German forces made movement for both sides almost impossible.  Fighting had been continuous in the salient since 1914 yet rainfall such as this was unprecedented.
Both General Gough’s Fifth Army and General Plumer’s Second Army participated in the opening day of the battle for ‘Pilkem Ridge’ on the 31st July, the rain began the same day. The vast array of British artillery, over 3000 guns, now available for the British was unleashed to devastating effect firing over four million shells breaking German defences but also the drainage systems that lay throughout the area leaving water filled shell holes.
A series of difficult battles followed ‘Pilkem’ at ‘Gheluvelt’ plateau and ‘Langemark’ as the British Empire forces slowly struggled forward.  General Plumer’s 2nd Army used a ‘Bite and Hold’ approach at the ‘Menin Road,’ ‘Polygon Wood’ and ‘Broodseinde’ to slowly make their way towards the final ridge on which the remains of ‘Passchendaele’ itself littered the ground.
The advance entailed a struggle with conditions more than with the enemy.  Both armies became bogged down in the morass with untended wounded men lying in shell holes filling with dirty rainwater, with no-one able to aid they slipped under the rising tide.  Exhausted men struggled to move artillery in the mud, railway sleepers laid to form roadways through the theatre were constantly under fire from an observant enemy making passage difficult.  Weary men fell from these wooden pathways into the mire and equally weary men had not the strength to retrieve them, walking wounded stumbled for miles over the wet ground to the casualty clearing stations more dead than alive.  Medical teams in muddy conditions carried out operations hour after hour all the time with the danger of loose shells arriving beside them.  Men remained under constant fire from artillery, mustard gas, machine gun and rifle bullets, sometimes from their own side.  When the rain cleared there were few days when the sun was noticed and never enough to affect the ground.  The foolhardy use of tanks, against advice, saw them slither into the mud where they say some might still remain.
Passchendaele itself was taken by General Plumer’s Canadians on the 6th of November slithering over the slope and into the ruins of the church atop the ridge.  This over three months after the battle began.  Success had been achieved yet both sides suffered, the British well over 300,000 casualties, the Germans possibly around 250,000, on both sides morale reached a new low, and exhaustion was the order of the day.  This battle rightly or wrongly came to represent how Britain saw the entire war.
It is thought that both General Gough and the well respected General Plumer wished the battle to be brought to an end as both knew well the conditions the troops endured but army generals do not carry the responsibilities of Commander in Chiefs and Field Marshall Haig had wider fears to contend with.  Not only had Admiral Fisher revealed his worries re the German submarine attacks but Haig was well aware the French army had mutinied.  The General Nivelle offensive had failed at great cost and the French army, badly paid, badly fed and once again suffering great loss saw morale break down completely and in many areas whole Brigades refused orders.  In Haig’s mind the weakened French could not be trusted to defend if the Germans attacked, also with the Russians leaving the war this allowed Ludendorff the German army commander the opportunity to transfer a million men to the western front, some of whom arrived at the end of this battle, to Haig this meant capturing the high ground was vital.

Historians will forever debate the rights and wrongs of his decisions, none of these have ever had to make such a decision knowing that the lives of his men depended on his conclusion.  Haig was not an uncaring brute disinterested in his men as some claim, nor was he infused with a sense of sacrifice he was however a soldier who obeyed the order to fight the enemy and accepted his responsibilities whatever the cost.
Some 750,000 Scots, Welsh and Irishmen died during the Great War and the responsibility for this was laid on Haig and the generals by Lloyd George in his memoirs, memoirs which appeared after Haig and the generals had died and were unable to answer.  This was to avoid blame being laid on   Lloyd George’s shoulders, he after all was merely the Director of Munitions, a member of the war cabinet and from late 1916 Prime Minister!  He also encouraged the Gallipoli campaign which failed spectacularly!  Had the Field Marshall lived to answer his critics and had as many friends in the press as Lloyd George we may well have had a different view of the burden he carried during these years and a clearer understanding of reasons for the ‘Third Battle of Ypres,’ the battle better known as Passchendaele! 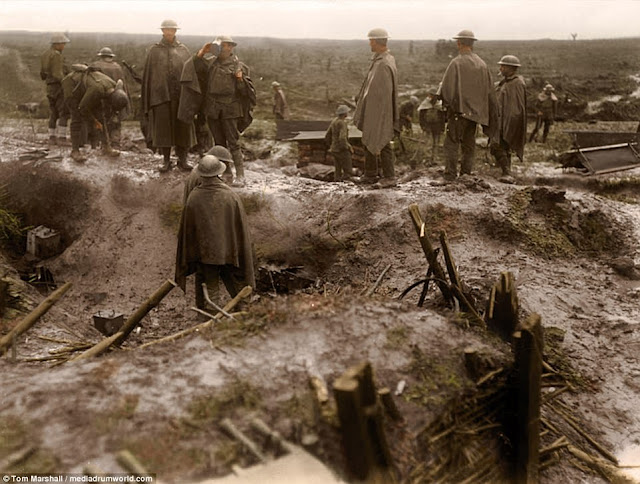 Men named on the Braintree and Bocking Great War Memorial
who died during the Third Battle of Ypres.


The first day of the Battle of Pilkem Ridge, the beginning of the 'Passchendaele' battle.


Battle ended when Canadian troops took the Passchendaele Ridge on
November 6th and consolidated the ridge by the 10th.