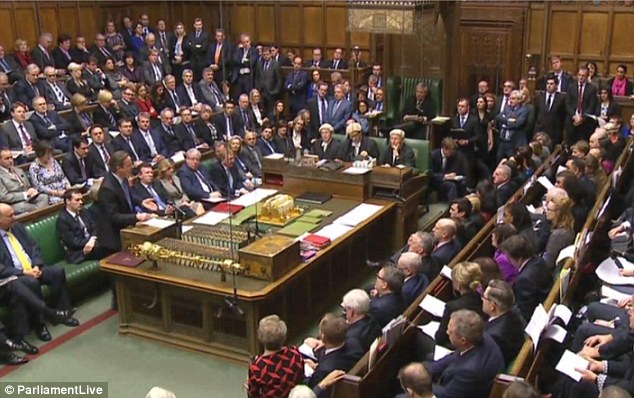 I spent much of the day with the Syria debate in the background.  The House of Commons was full of people with something to say about the debate as to whether the RAF ought to be bombing Daesh in Syria as well as in Iraq.  A serious situation which many treated seriously with a bit of banter and finger pointing but on the whole a decent debate.  The two leaders however were very different.  The Prime Minister David Cameron began the debate with a speech high on words but low on conviction.  He was convinced of the need but when questions arose he failed to satisfy.  Last night he spoke to a meeting of Conservative MP's and used the phrase 'Terrorist Sympathisers' on those who wish to vote against his motion.  Today he was asked on several occasions to apologise and he fell into the 'Eton Prefect' mould and ignored the question, it was an act of brazen ignorance which did him and the post of Prime Minister no good whatsoever.  Cameron continues to demand the bombing of Syrian targets (with only eight planes added to the eight we already have there) without civilian casualties or the loss of a plane yet has not given any indication of strategy behind this.  The real reason is keeping in with the 'allies' and getting a seat at the political table.  The bombing will do little to stop Daesh.  The plan remains send in the jets, no further plan is available.  This looks good.
Jeremy Corbyn on the other hand opposes the bombing as he always does yet his performance was poor.  He made his points while constantly and probably deliberately interrupted by Conservative questions and appeared unable to put his case sufficiently.  Both front benches performed badly for differing reasons.
The short few minutes for speeches from the backbenches were far better.  Many had prepared well, knew what they wished to say and made a decent case for their opinion.  The majority Tories will support the motion, the SNP and many Labour will oppose and David Cameron might well find the easy victory eh expected when he called the debate will not materialise.  He will win but not by a large majority.  The debate continues, time being short speakers now have only three minutes to get their point across!  This is because Cameron insisted on the debate lasting only one day and not two or three as important debates ought to do.  That also has gone against him.
Bombing while allowing financial assistance from Saudi Arabia and Qatar appears daft yet we do this.  No money is being spent on attacking the internet usage by Daesh, no attempt to curb their social media usage, much better to bomb.  The Turks have been buying Daesh oil some say while sending their men to fight the Kurds fighting Daesh!  We have failed to give armour to the Kurds, our best fighting men facing Daesh as this upsets the Kurds!  What a mess we have in front of us and in the end we will see a similar debate when this clown wishes to send our troops in on the ground alongside our allies!
The debate continues.

One thing is certain, and must never be forgotten or overlooked..our freedom; our way of living, our democracy, all of which equate to our freedom...must be protected and preserved at all time.

I probably don't know what I am talking about again, but it seems to me that there is more than enough air-power operating in the area already. Therefore, sending more British planes would just be a waste of resources better spent on providing arms and supplies to the Kurds and others in the area, who could prevent chaos from consuming the region (as you have proposed). As we keep seeing, kicking over anthills is relatively easy while keeping the ants in check afterward is the real battle to be won.

We are already bombing in Iraq anyway. Margaret Becket and Hiliary Benn were excellent and Benn I think will make a move towards party leadership. I'm with Lee its a very dificult choice either way and I think it should have been an entirely free vote with each member voting with their conscience. A good debate but I was surprised by the majority in favour as I thought it would be closer.

Lee, The reasoning was the problem.

Jerry, Too many planes and how many doing something correctly?

Dave, I was surprised by the majority. However half of them are still dubious.