One Man & His Bike 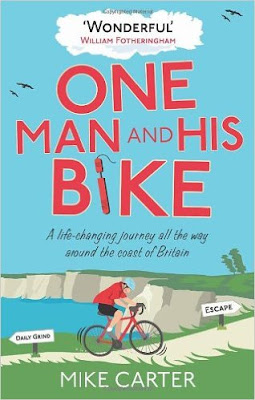 The other day I mentioned the need to acquire a new 'Can't put down book' and soon afterwards had several in my possession.  This was indeed one of those 'can't put down books,'  "One Man and His Bike."  The story concerns a Guardian travel writer with problems, (I spelt Guardian wrong, that's irony) and he works through these by accident while cycling around the coast of the entire United Kingdom.  This is the type of book I like, it covers places I know or would like to know, the type of people and situations I have known and would like to or not like to know, and takes me out of the world around me and into a far flung land at least for a time.  It also makes me want to get on the bike, when fixed, and travel down country lanes enjoying the quiet sun filled backwaters.  It also makes me wish to write a similar but different version of the book.  One of these is possible...

The book is unputdownable!  Divided into relatively short chapters rather than a long slog Mike Carter cycles off traveling through Essex keeping the Thames and later the sea on his right and the land on his left.  Here we find his first surprises, London and all large cities are full of grumpy miserable people yet before he has passed out of the conurbation he is given a map book by a friendly Asian shopkeeper, something that did not surprise me but did him, as he learned here that not all in London are gits, just the majority.  His second surprise is the vast difference that appears when out of the metropolis.  Another world awaits just a few grossly overcrowded roads away from the M25 circular.  Mike was to learn from his travels just how kind people in this island can be and just how wonderful the island is outside of the city.
Mike cycles for a total of five months camping or staying in bed and breakfast places, his descriptions of the people encountered ring a bell with anyone who has passed this way before.  The dragon at one camp and the off hand kindness at another, the B&B's with friendly hosts as they all appear to be and the people he meets on the way who become friends overnight.  Indeed the people he meets are as important as the coast itself.  His descriptions of the land and the conversations of the people made me wish to travel out and meet similar, but we can all do that daily nearer home I suspect.  After all I have met you on here and that has been good for me in similar manner.
Occasionally he meets with rebuff, indeed slight violence, but the majority of the time and people are good to him.  His problems with the bike required help from occasional bike shops but these allowed him to delay and consider the place in which he stopped.  The sight was not always good.  The collapsed towns where Thatcherism had removed the old industries reeked of decay, even worse nobody appeared to do anything about it.  It brought to my mind Cowdenbeath during the General Strike, both then and afterwards the vast majority made the best of it, no vandalism, no graffiti or smashing empty homes, instead the men grew veg for the pot and people worked together, I found myself asking why can they not do this now?  His meeting later in his journey while in Wales with the 'DO' conference made a very different impression, that was worth reading.
So much of the west is wealthy, and many middle class towns with Couscous and Adoki beans for lunch rather than chips, incense from shop doorways and Laura Ashley dresses came under his wheels, in some the Guardian man felt at home seeing there a vivaciousness where I would have seen people far from the real world.  The contrast throughout the book reveals Britain as it is today in a manner those passing through in a car or train would fail to notice.  When his bike fails he struggles get a bus into a town with a bike shop, deregulation means several bus companies but each travelling at limited times.  A journey to Castle Douglas and then Dumfries to the bike  shop takes 13 hours, he could have ridden in an hour - if the bike was fixed.  Thatchers legacy is everywhere.
Others come into the picture, the many he passes riding from Land's End to John O'Groats, others like himself riding around the coast, one great man in his seventies and faster than Mike! Characters all who bring the trip to life and who encourage the cyclist on his way.  I was going to say weary but his weariness came as he became fitter by the day, my weariness is unlike his!  Cafe owners, cyclists, B&B folks, camp site owners, all had a story, all covered life, almost all were good to the passing cyclist. Such travellers find temporary friends everywhere,  could we find them if we were more permanent I wonder?
This is a great book!  It is enjoyable, covers a lot of ground, several thousand changing miles, takes us out of ourselves into other worlds and other lives, reveals the beauty of the land and at times the beauty of the people.  It affected the rider, changed his life for the better, it might change you also.  Read this book if you like travel writing, it's worth it.

I guess, then, once you mend your bike you'll be packing a backpack and heading off. We will, of course, expect day by day updates of your trip.

I shall have to look for this.

I can't remember whether I have recommended Donald MacIntosh to you...I've read his 'Travels in Galloway' and 'Gone Native' but can't get my hands on his other books (well, not at a price I'm prepared to pay).
A great observer of nature...and tells a good story.

It must have been a god book ~ your review gives you away!

Fly, I'll look out for them.