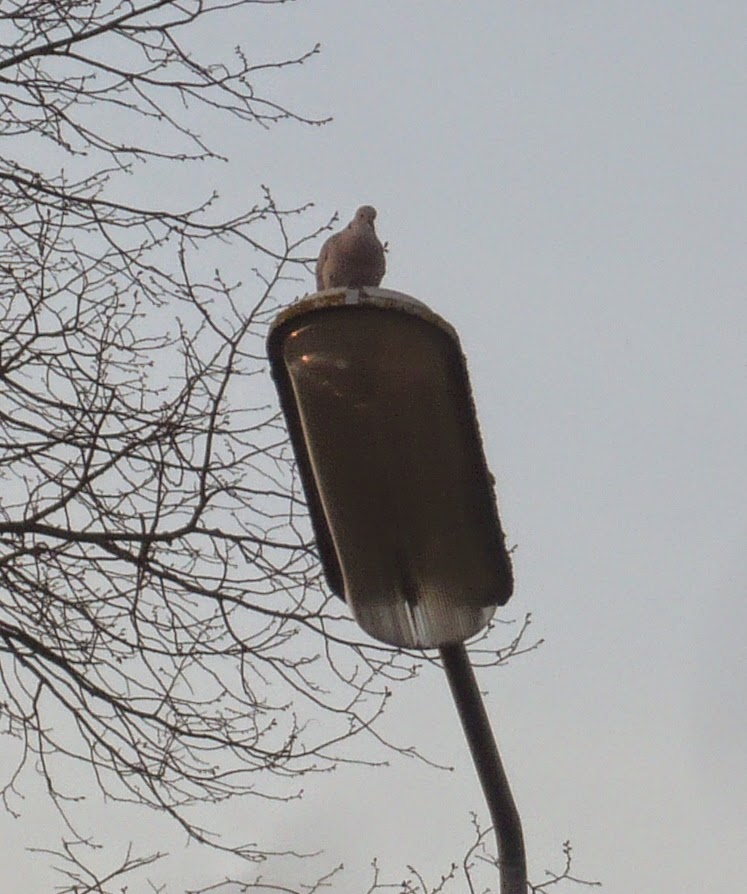 This here brute is sitting on the lamppost once again giving out his call sign to the girls.  he was there this morning as my bleary mind attempted to join the world.  Coo, Coo, again and again and again, ignoring the comments made by decent folks attempting to sleep or awaken.  He went on and on and on and on with no reply from the girl who was probably looking into something shiny somewhere worried that her feathers were not quite right.
He is back tonight as he is every night.
This has gone on for years, ever since I moved here the brute, or his father or forefathers, have sat opposite me calling out at all hours, all inappropriate hours at any rate, seeking their beloved, or anyone's beloved if need be.
Now I love bird life, especially chicken that I had with chips tonight, and I rejoice in the birdies pairing off and enjoying Spring but I wish they would do it either quieter or elsewhere, especially before six in the morning! Look, a blue sky!  They say we will be hotter than Madrid tomorrow, even if they do not say it is snowing there.  Twenty degrees of heat they promise, once the clouds lift.  We will wait and see as at the moment the dying embers of the sun lightens the blue sky but does nothing to stop the cold wind freezing my sporran as it howls through the window.  Bah!

"Coo! Coo! Coo-Choo!" Perhaps he's waiting for you to answer him, Mr. Ad-Man. Try replying to him to night! Don your glad-rags (or feathers; a fun night out might be in store!

I can just picture you, with joy in your heart, sipping on coffee in the early morning, happily listening to that lovely dawn chorus. Oh wait, that must be someone else! :-)

Try what is laughingly called here the Laughing Falcon...the blasted bird can beat the Laughing Policeman hands down...

Lee, Coo-Coo, it will be shoo-shoo! Possibly shoe shoe at that!

Kay, You make me laff!

Fly, Don't send him over here!