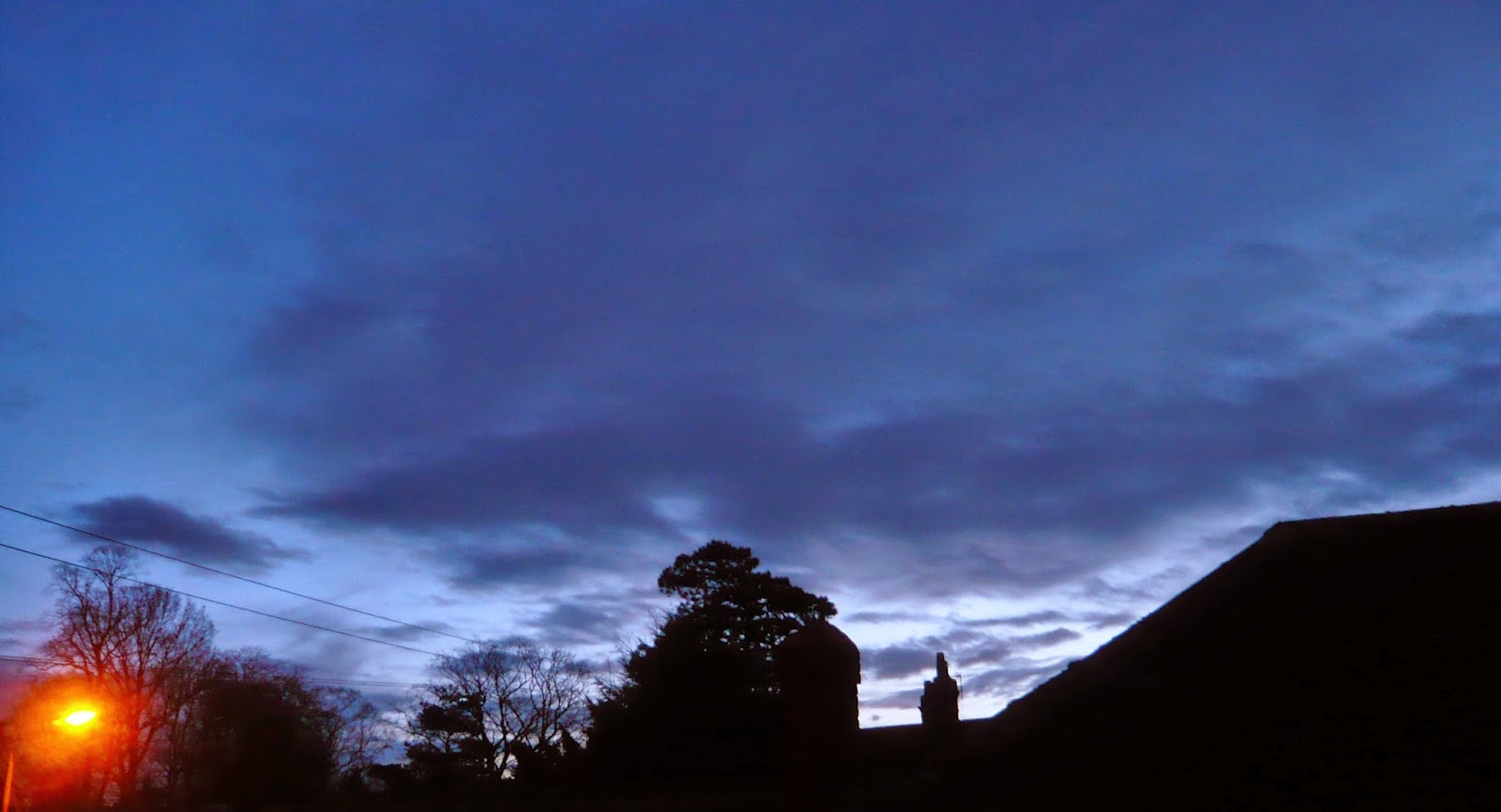 Stupidly I awoke long before I was awake this morning.  Why on earth do I do this I ask?  It was dark and as I struggled bleary eyed to find something for breakfast I could hear the birds in the trees beginning to waken also.  Maybe I disturbed them?  I took this pic at 7:20 a.m. long before the rest of world was awake and the birds and I ate our breakfast while we read the papers online.
Another week has ended and I still have not got through Tuesday yet!  Time flies when you are having fun or if you look away for a moment.  Time flies though my mind confusingly today as I spent part of the morning researching a man from the Great War and in the afternoon I was after a sailor in world war two!  At times my little brain confused the lists I was searching and managed to be twenty years out several times.  I need to eat more fish!

The day ended in the failure of the referee to abandon the game at Ibrox before the kick off like he ought.  Instead we struggled to watch the Heart of Midlothian kick a yellow ball in a snow covered pitch.  Imagine, Ibrox yet not one orange ball to be found!  After twenty minutes it alls topped, and probably for the best. However as we were well on top it is difficult to avoid thinking this was because Rangers did not wish to lose, as if!  Worryingly the weather man says some snow might land here tomorrow , how disgusting!
Kids like snow because they are stupid!  Snow freezes the streets, makes walking difficult, causes accidents and stops football getting underway.  Snow should either be banned altogether or sent to Norway where it belongs!  How can anyone like snow?  What is the point of it?  I agree it makes nice photographs, though the photographer gets frostbite taking pictures in it. Certainly it provides hours of amusement for kids, dogs and daft folks, but really can they not all jump on a plane and fly to Norway? Maybe I need to move to Australia?  Anyone willing to send the cash?  There you go, stupid question number one!
I now sit here, wrapped in old blankets, trying to keep warm while sleep that has never left me all day takes me into dreamland.  Unless of course I fail to dream.  Funny how some nights I have clear colourful dreams and on other occasions I am not away of any dream whatsoever.  The last one involved the building in London, clear as day from the outside but a bit jumbled indoors.  Not the first time I have dreampt of this place.  How strange the way memories come into dreams, a wee bit distorted but clear enough.  Tonight I expect to dream of sitting in front of a laptop, freezing, while searching for a man or his family and getting confused the further I seek.
Or did I dream that today and I am now asleep and will wake up any minute?
Oh I am confused now......

Snow? What is this strange stuff you speak of? I was just thinking as I read, you should move to Australia. And next thing, you wrote it. Long gone are the days of the Ten Pound Pom.

How strange, I was typing a post about frogs and somehow, I began thinking of koalas in Australia.
We must be on the same wavelength or something. That might scare you but there it is.
We had a very bad snowstorm that crippled the city of Atlanta last January. I hope it does not happen this year.

Sniggering at the lack of orange balls at Ibrox...

I figure the lack of orange balls is their denial of snow. Orange is the official color of the University of Tennessee so I am sure we could have found an orange ball for you. I too dream in color and I find it refreshing that you do too. My Prince loves snow and has wishful thoughts of we Tennessean having at least one good snow fall this year. So far only a dusting and it is January. Snow usually falls this month for us. Have a grand time in your search of the wars. Peace

I awoke early too, far earlier than I wanted to be awake...but it's very hot and muggy here still and sleep, for me, was very erratic throughout last night. Today already feels like it's going to be a repeat of the past few.

It's time for a lukewarm shower, I think and a quick run to the supermarket before the real heat engulfs the day. I will take my car, though, as it's far too hot to run to the store and back again.

Great shot of the sunrise.

My dreams are a lot less interesting than they used to be. I wonder why. I'm kind of sorry about it I have fewer nightmares but fewer wonderful dreams too.

Kay, Frogs & Koalas are very similar - apart from the differences!

Fly, It's a giggle innit?

Jerry, I admire your taste.

Jenny, I wonder if you are too tired to dream? Or just not getting enough variety in the day?

Have you been chopping up onions again, Mr. Ad-Man?