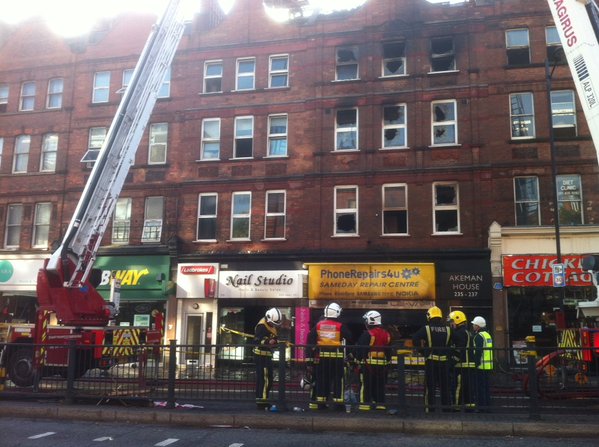 Jenny has been keeping an eye on a fire in Finchley Road and I wondered if this was the building I once lived in.   In 1975 I moved into a sad little room at the back, taking the opportunity when it arose to move sideways into a sad little room with a window later.  However I do not think this is the block I lived in, there is an entrance next to the yellow sign which is now closed but used to be wide open for all and sundry to enter. I think that was the doorway graced with my presence. 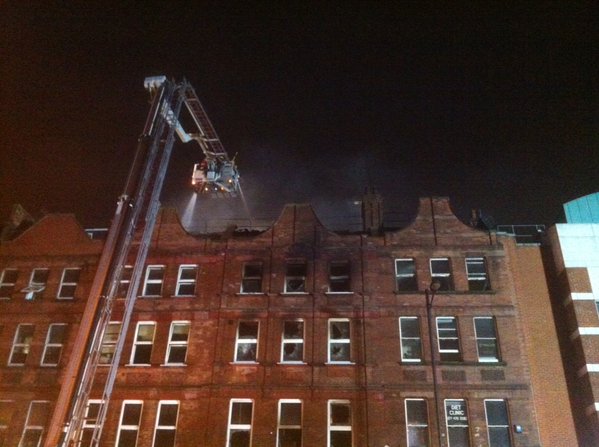 I lived there over the window, glad to have accommodation I could afford, happy to ignore the window in the bathroom that would not shut whatever was done to it and content to listen to the mice wandering about the floor as the skirting board left at least an inch space for them to pass through.  The main problem was the train station underneath.  Right outside the back the four lanes of busy Underground trains ran all day well into the night.  The high pitched women's voice constantly giving out "This train is for Amersham, stopping at...." all day and changing with each arrival and then back again to the Amersham message.  How easily I could have shot her!
The entrance was at the back and once inside it was the only way out.  This meant if you were on the top floor you were stuck if fire broke out, and as with all badly maintained buildings, especially aged uncared for ones, that was always a fear.
Most of these today are offices but it may be some still house rich peoples, poor peoples cannot live in London these days!  I canny mind what rent I paid to the chap on the top floor with the Sten gun on the wall but it was affordable.  There again I was only earning £35 a week.  Today I suspect I may have to pay around £4oo a week for such a position.  At least it looks like it may have been done up but when I was there the block was not glorious.  Somehow I don't expect this block to be in use for a year or so.
Having looked closely I note the new building to the right of the building and it appears the block I lived in may well have been demolished and replaced.  I went through the entrance way and I think it was the second door along we lived at.  Now it is the back end of Sainsburys!  At least it looks safer.

When I moved to Brisbane to work and live back in 1965 the first flat I lived in...shared with another girl... was one of two that were part of a house. The landlady had converted her house into the two flats and she'd converted underneath the house (a Queenslander was the style of the house). Over from the back fence, and just a few yards from my bedroom window were four train tracks...the main western line. I ended up getting so used to the sound of the trains passing (and the shaking of the house) I never noticed the noise or the trembling of the pictures on the walls. Our visitors always noticed, though, and had pleasure in pointing it out to us! lol

It is interesting how we become desensitised to city noise. I don't think I could ever live in a big city again.

Cities are for those who need entertainment. I choose a quieter path now. My little house I bought was right in the flight path of the Nashville airport. Some times the knocker on my front door would rattle and then I also had the wonderful Interstate 40 in my back yard. I could always tell before I headed downtown to work if I needed to get on the interstate or take a back road into town.. You get use to the noise but now I am use to the quiet. Peace
BTW I unravel at fires because we had 3 homes to burn and the second one I was almost up in smoke with it. Peace

Lee, I have a main road outside and you get used to the noise. I am glad they built the bypass mind.

Carol, I agree. That flat has the main road north outside the front window, constant noise! I am too old for that.

Lady, The quiet is for me also.

Soub, I wonder what started this, always easy to start fires.

Yes, easy to start fires...check who gets the insurance.

Yes, those blocks do have entrances at the back too. At least they get a bit of sun at the back. They are still hell holes. What has got everyone around here amazed is that there were 2 investment bankers living in one of these flats. What does that say about the plight of ordinary Londoners who just want somewhere to lay their heads at a normal rent? If investment bankers are going to live over a phone shop, with the trains at the back the lady who STILL announces Amersham and not 4 but 6 lanes of never ending traffic at the front, and the place shaking every one and a half minutes as the Jubilee line trundles to and fro...well how can the city survive, frankly. You won't get investment bankers doing anything useful to keep the transport running the hospitals staffed, etc.
It is really cool to think that a much younger version of me might have bumped into a much younger version of you. At that time the area was mighty different and many of the places were derelict or squatted. One of the most interesting bits of that stretch of Finchley Road was the star people, who lived on a disused railway station with a horse and van all painted up really beautifully. I don't know who they were but I think they harked back to Celtic times, or tried to.

Fly, You are so cynical!

Jenny, Investment bankers? They probably happily paid £500 a week!
Were you ever wold whistled by a strange looking creature outside the library...? Just asking like...