The reason my back aches as much as the knees is this allotment.  Having an easy day they said, which meant working in the allotment.  The goods that grow organic like here are excellent and I wish I had a small garden in which to do the same.  However the bending, cutting, pulling and lifting are no longer aspects of my life and I have few thoughts of going back to them.  This did not make any difference to my friends!  In spite of their various health problems the work had to be done and therefore as I was the youngest and for unknown reasons considered the fittest I had to follow orders.  What was revealed was the level of fitness I possess, a near death experience I think it is called.  Having dragged me all over town, along the beach and up Mont Blanc, through Wareham and dumping rubbish at the council dump I can tell you I was ready for the Friday trip home.  The morning saw desperate prayer as I could not consider a long train trip tired as I was as a jolly.  Prayer of course worked and the trains, and the exchanges were as good as could be!  However by Friday morning I was worn out.  Monday sees me still recovering and my knees not keen on climbing stairs.
Again I embark on one of those exercise periods, this time I must continue this, otherwise I may well die. 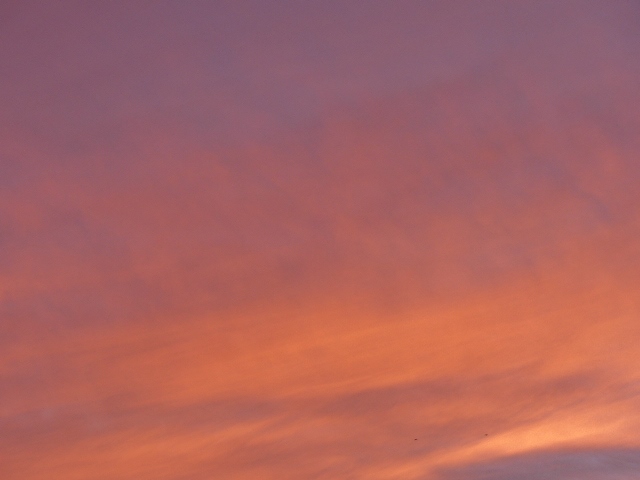 Dawn yesterday promised bad weather according to the proverb, remaining indoors I never really noticed how it went but it did not appear too bad to me.  Should we believe 'Farmers tales?'  There must be something in them as folks who work out of doors always watch the weather and little things attune them to the changes unseen by others.
One thing about being back home is it means I do not have to watch others TV choices.  The missus relaxes after her hard work by making use of brain dead TV, 'Murder She Wrote,' 'Heartbeat' and 'NCIS' being the favourites.  These I watched with no remarks regarding the stilted acting, the bad scripts, the hairstyles (of the men!) or the endings, which were obvious, no I stayed quiet all through wondering if having my teeth pulled would make for more enjoyment.
In 1978 I got rid of the TV.  I did without one until 1986 when the World Cup forced me to obtain a freebie when neighbours left for the richer suburbs.  Since then football, news, a documentary or two are about the only things I watch.  The so called drama these days is mere soap operas but soap opera with guns, explosions and near naked women, real original drama with new story lines, original events and proper acting appear rare.  Placed alongside a diet of house programmes and bloody cooks I find little of joy on telly these days.  There are good things available if you search hard enough but only rarely.  The demands of advertising force bread & circuses on commercial channels and the BBC appears intent o following them.  It's a disgrace I say!
However on the other hand sitting stuffing chocolates and other unhealthy foodstuffs down my throat as we gathered around the big screen was enjoyable.  Being with this my 'other family' is relaxing in other ways than forced marching.  I first came across them in 1971 when I entered a strange dark Baptist church in Notting Hill and spent a little time with them then as he ran his first attempt as church minister.  The place had almost closed a year before and he started with only a handful of people and left a thriving growing congregation behind when he moved to the coast.  There he took a thriving congregation and left them in a new building, a disused cinema costing a million pounds.  A great success at both places and all this leaving behind a sense of 'love' of the proper sort.  Of course they remain members of the church there but without the 24/7 stress, that belongs to others now.
I would be nothing without them, they gave up so much time for me as they did and do for others, and I owe them much.  There are so many people I have met who have been good to me it is a wonder how so often I think only of the bad ones.  It is a truth that if ten things happen, nine of them being good ones, the one bad thing is what sticks in the mind.  We all have bad things happen to us and bad people abound, truth being we also do bad things to others but this we can justify to ourselves, these things happen and we just have to get on with it.  I am glad there are good people out there who read this and some who miss me when I am gone.  This surprised me somewhat as I thought you knew I was away but cheered me up a great deal to know you could not live without me.  What?....oh!  Anyway that made me happy. 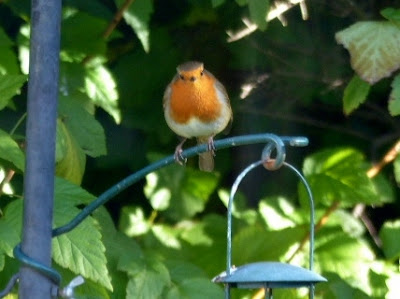 There was indeed a well kent face missing....

You're right, we tend to remember the bad and forget to be thankful for the good people we encounter.

Oh and while thinking of bad people, I hear that The Neighbour has surfaced...missing a finger. An accident with a machete...but whose?

Just don't be in a hurry to do it again...okay?

Red sky in the morning etc., was a well-worn saying in our home when I was a child. That saying and also "not letting the sun go down on one's anger" were uttered often. I wonder if parents today still use them.

We do tend to remember the bad things. What we should remember to do is concentrate on the good.

And we should also remember when we go away for a few days to hurry up and return home. Running around the countryside can get one into trouble...and you need us to keep a good eye on you! :)

As you watch little TV...it's a shame you missed "The Honourable Woman"...it was a brilliant eight-part series.

It can be so refreshing to be with good and nice people who care, even if you only go a few miles. In your case, I know it was more than a few miles.

Whoa, did we ever give you the wrong impression.

Fly, A finger? Only a finger? Where is Wonga when you need them!

Lee, My TV is NOT for that sort of thing! Only football!

Jenny, There are a lot of them about in reality.