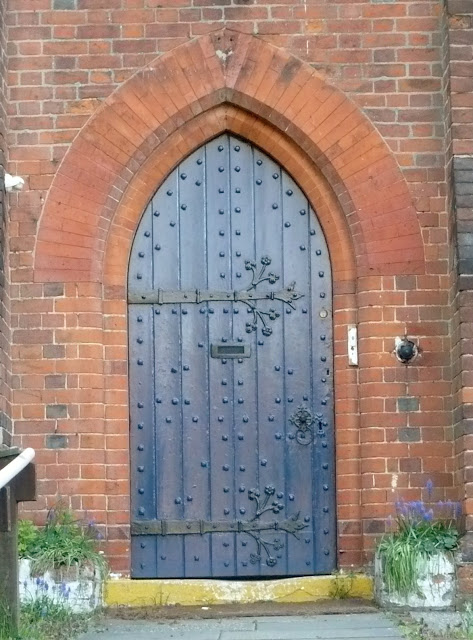 Sadly as I passed the other morning the sun was shining on the other side of the street.  This is unfortunate as I would rather this door stood out a bit brighter than it does.  It belongs to what was once the vicarage, and Victorian vicars were very important indeed.  Powerful in the world around them their houses reflected their importance.  To obtain such a 'living' was something to be sought, although whether they cared  about God or not is debatable.  Anthony Trollope spoofed the Anglian church of the mid century in his book 'The Warden.'  It was so good even I read it!  Today things are somewhat different. large vicarages, rectories and deaneries have now been sold off, turned into flats, demolished or like this one put to a variety of uses.  Here we find offices and living accommodation together I believe,  and I do know a lass born here when dad was vicar, and that must have been around the time of the second world war.  How times change. 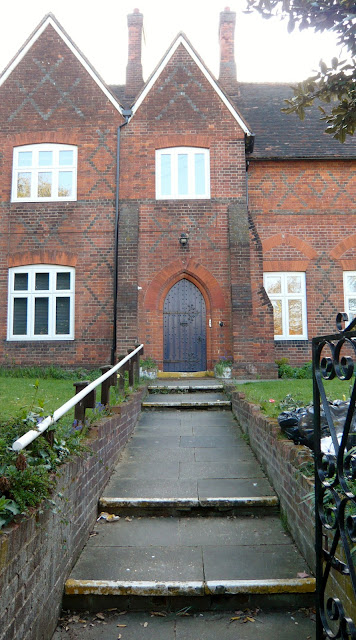 like so many others the vicar would merely cross the road to his church and begin his work, although he ought to have been working before this I say!  His church has stood on this site since the 12th century, possibly following on from a Saxon construction and even a Roman cemetery.  The town was a mere fifteen miles from the Roman garrison in Colchester, a days march and this may well have been a regular stopping point.  Certainly a small hamlet of some sort was erected here.  Lots of bits have been found from that time. 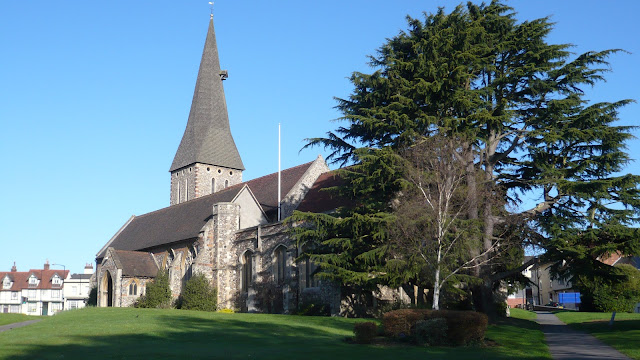 As the vicar crossed the path to St Michaels church he would possibly note this niche on the back of the church. 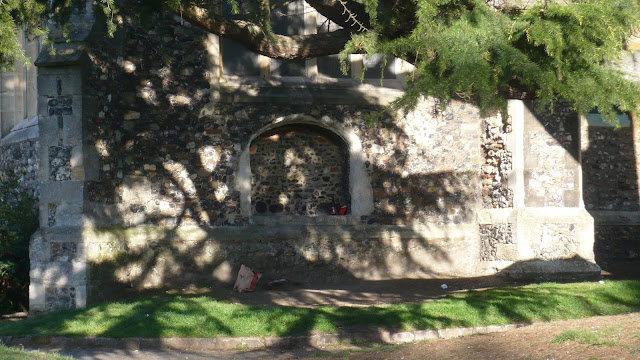 In times past as pilgrims made their way across to various shrines, there was St Edmunds in Bury St Edmunds, and another at Walshingham in Norfolk, they would make use of such niches where some form of blessing could be found.  Sadly I cannot remember all the details and I have no info to hand.  I could spend time on Google but my chips are beginning to burn so I will let you ponder on the blessing received b y the neds empty beer bottle and KFC bag instead.

There is something fantastic about pictures of doors and windows. Endless opportunities. I have tried taking Pics but i have to say none come close to yours.

That is a particularly nice door. In a way nicer not to have lots of shadows and highlights. Looks like a good vicarage too. I always wanted to be brought up in a vicarage, just too late now!
I love to find bits in old churches that hint at the life of the past. The pilgrims must have looked forward to having their blessing at the church, a bit like collecting passport stamps I suppose, they could feel they were really getting somewhere.

Jenny, You will one day find a nice vicarage to live in.

RDG, Are you talking about yourself again...?