What a Great Day! Never in all my 25 years did I ever expect to see a Heart of Midlothian versus Hibernian Cup Final!  Today, by defeating the green half of the evil twins, the Heart of Midlothian stormed through to that very final! Of course after a hundred and what years these two Edinburgh sides have met before in cup competitions, with the Maroons usually, but not always, coming out on top.  The last time was a few years back when the Heart of Midlothian walked all over the wee team at the semi final at Hampden by four goals (count them) to nothing (count them!), and continued on to win the oldest cup trophy in football once again.

Today we merely scored two delightful goals against Celtic, for some reason cionsidered favourites.  Lord Rudi Skacel's delightful left foot (seen above) scoring the first just after half time.  We continued to look good after that, with no failures of any sort amongst our maroon clad side.  Allowing the overhyped Glasgow side an equaliser (and offside at that) was not a good idea so close to the end of the game.  However minutes later the smiles were removed from the knuckle dragging beasts when a hand from a Celtic defender blocked a goal bound shot and ensured we had a penalty right at the death.  They even had a cheek to claim a clear handball was not a penalty!  Tsk!  That nice Mr Beattie sent the idiot goalie the wrong way and we were through!

You may now stand on a chair, raise your voice, and yell WOOOPEEEEEEEEEE!
I just did. 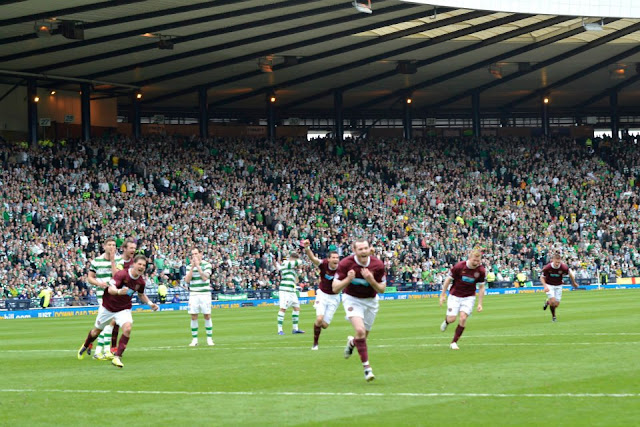 The Edinburgh clubs did meet once before in the Scottish Cup Final, but that was back in1896 and even I was not around then.  Hearts won by goals from Davie Baird, Wullie Michael and Alex King.  The Irishmen, and there were twenty five thousand who had emigrated to Edinburgh by this time, scored through Jo 'O Neil. Jo then disappeared into obscurity where Hibs folks belong. Seventeen thousand that day attended the match, the supporters of the Maroons, in the majority, throwing their hats in the air as victory was achieved.  Their descendants will do likewise in May.  I suppose the Irishmen just vanished when the game was decided, usually there are a lot of them disguised as seats at these games.  The final was actually played in Edinburgh, at a place called 'Logie Green,' the one and only time the Glasgow based SFA made a sensible decision.  There will be suggestions that this game ought to be played in Edinburgh, at rugby's Murrayfield Stadium, but I doubt this will happen.  It must be remembered that the Hearts have defeated Hibernian so many times that to equal our victories it would take Hibs, at four games a season, twenty years to equal our victory totals.  The present Hibernian side comprises many loan players, two or three neds, and a dope. 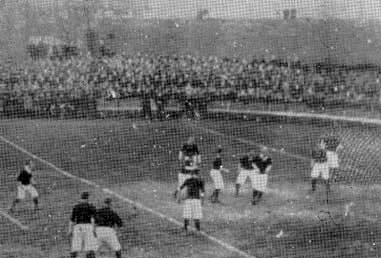 Can I just say how delighted I am at this Edinburgh derby cup final? A breath of fresh air!

25 years? I didn't know your birthday was on 29 February. Bring on the Hibees!