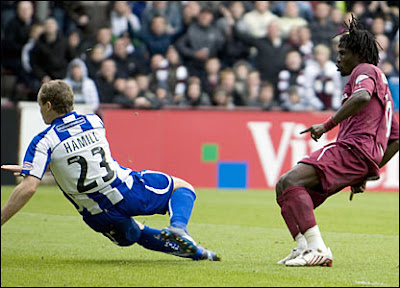 Woeful! That is all that can be said. Luckily I missed the first half of this as I had Flanders Stew to burn, and was content to let Jeff Spelling and his crew keep me in touch. I wish I had not tuned into BBC Scotland to hear the second half. Stupidly I did and was reminded of many, many, far too many boring games, usually played under gray skies darkening and emptying rain on one and all. How many times have I watched the Heart of Midlothian struggle against sides we should beat. This means no disrespect to Kilmarnock, who were the better side today, but the Hearts ought to be able to beat them and all others at home!

The description from the BBC commentator that no one was "...driving them on," brings back memories of last season despair. None of the senior players takes responsibility and plays a captains part. None care that they take the money and don't do the work. No 'heart' for the Hearts it seems. The manager started well but it seems there is little change. There is a danger that if this slide is not halted we will once again be 'bottom six' struggler's alongside Aberdeen!

The picture of Kingston's goal looks good, as do the rest, shame the game sounded poor on the wireless. Excuse me while I go and weep once more.......
Posted by Adullamite at 17:27:00

It was woeful - a return to last season's pitiful performances. Hearts do indeed lack leadership. And some decent players...