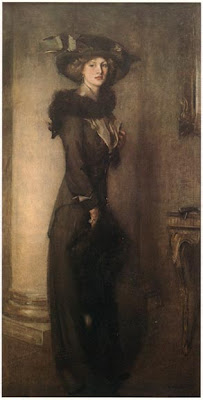 This painting is called 'The Beaver Hat' and is by the Scots painter Edward Arthur Walton.
I post it simply because I like it. In the days of long ago I used to attempt to take portrait photographs and became quite adept at this. In fact of the thousands of pictures taken I found three that were worth looking at! Sadly I have not succeeded in continuing this success story through a lack of models, although I have enquired about the availability of several lassies as they passed by. The ASBO hinders this somewhat now.

I like looking at portraits as they tell us so much, mostly indirectly. While we look at the individual shown we learn much about the society around them as well as the portrait painter or photographer. It appears to me that far too many today tell us more about themselves and little about the subject. This is very sad. 'The Beaver Hat' tells us that the date is pre-war, the 'Great War' that is, but says nothing about the lassie posing. Had she been important I suspect her name would have been well known in artistic circles, and a large fee paid for the painting. This must therefore be a model. Such hats were popular amongst the girls of the day, if they had cash, and kept many a trapper happy in the wild west, although they may well have been travelling by Model 'T' Fords by this time! This is a lovely picture, simple and straightforward, a limited background, (looks like some bedsits I have known, dull, dirty and dingy,) with the lassies face highlighted and standing out from the rest. I like it. I wonder how much this would cost in today's 'Credit Crunch' society?
Posted by Adullamite at 09:04:00

I'm not much of an art afficionado but like the portrait. There is a hint of sadness and vulnerability about it.

Sorry to lower the tone. But nice beaver. Mick Dundee.

My apologises in the heat of the moment I got the wrong character. It was of course Lt Frank Drevin Police Squad. Ok I will crawl back in my hole now-promise.