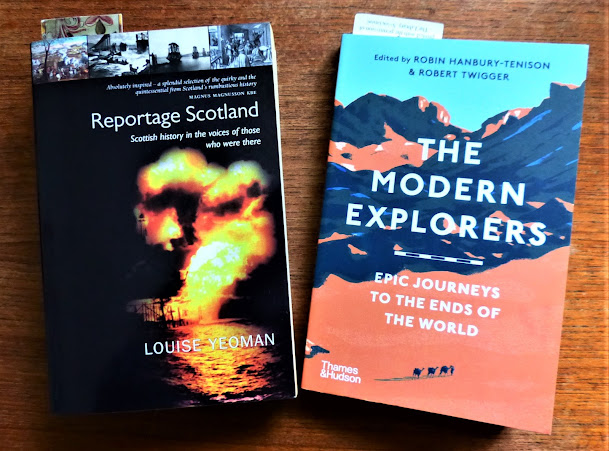 I have begun reading these two, what I call 'Dipper' books.  That is, they are full of short chapters on a variety of different subjects and therefore do not requre long term attention.  Ideal for bathrooms everywhere.
'Reportage Scotland,' was first published in the year 2000, this version in 2005, 'World of Books' tempted me again.  This attempts to give reportage from 'eye witnesses' or as near as possible down through Scotland's History, beginning with Tacitus detailing in 'The Agricola,' the adventures (always successfull) of his father-in-law, Agricola.  Some famous, some notorious I suppose, and many unknown people offer their view on events they see.
John Knox, the great reformer, gives his view on the death of Cardinal Beaton, a candle-maker in Leslie in Fife writes later to a freind of the problems caused by the bandit Rob Roy, and the 'Caledonian Mercury' of 1778 discusses John Paul Jones, a Scotsman who had joined the American revolution and later founded the navy.  The trial of Burke and Hare, or at least Burke, Hare had turned Kings Evidence and got off, in 1828 is here, as is the 'Edinburgh Evening News' report from 1890 concerning the opening of the Forth Bridge.
I love such books as they give an insight to historical events, important and less so, from the people who were there.  As always there is a need to understand from what perspective they are writing, but I think this is a great book.
'The Modern Explorers' published first in 2013, is slightly newer.  It follows similar short chapter settings where modern explorers speak of the sights seen and endured, as they continue to traverse the earth into places as yet unknown to most of us.  Polar regions, Deserts, Mountains and the like are covered by those brave, or stupid, enough to cross them.
One advantage of such books must be the short chapters.  Any that bore can be dumped and another chosen.  Another advantage is that you can learn something from someone who was there, or maybe near enough.

I'd enjoy the first.....but people going to the ends of the earth has never sparked my interest. Probably too much information about them eating the poor animals they used to get them there...

Fly, Indeed, the 1st is good. However, no animals allowed at the Poles these days.