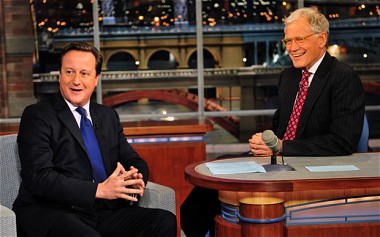 The Daily Telegraph have produced a 21 question British (Pah! They mean English) Quiz.  I got three wrong, 18/21, and I am quite smug about this.  'Dave' may have got about five right I reckon.  How many can you get right?

18/21 too.
I failed on dog collars, Welsh voters and numbers Cameron represents.

Richard got 17 right but I only got 11 correct answers. But hey, I am American and I beat Letterman!

I saw this on my news aggregator this morning and was gong to post it on my blog in response to all the edited "Dumb Americans on the Street" videos you always run. I knew maybe 5 or 6 of these (and I'm not British) but the right ones would have been edited out on the videos you usually run to make Americans look dumb. I'm pretty sure they ARE dumb, though. So are the Brits hanging out on the streets today. The Great Mr. Cameron was awesome, though. You should feel blessed to have such a knowledgeable leader. I know you do.

I suppose you noticed only 3 or 4 questions were actually about Great Britain and the rest about only England. Of COURSE you noticed. :)

David Letterman was hip back in the early 1960s. He thinks he still is. No way he could have answered his own questions.

Kay, Well done, a clever American, and there's not many of them!

Max, "edited "Dumb Americans on the Street" videos" I run no edited 'dumb American videos.'
If Cameron was so good, please keep him! Interestingly what he said at the UN has hardly been mentioned. This programme got the headlines and most folk would have little knowledge of this guy.
Cameron ought to have prepared questions for Letterman, mostly about abusing his secretaries.

Welsh voters. No idea, save that Cameron said his party did particularly badly there. Who would know the answer? Save for political party campaigners?

And dog's collars. That was a fifty/fifty guess by me. My dog had a postcode and a phone number on his tag. And he always carried enough money for the postage home... Or at least a phone call. "Arf, arf, gruff, grrr, woof."

Little did I know the information there omitted marked him out as an outlaw.

It sounds like you may have to do some counting.

Try having to do the living in the UK test. Us foreigners are required to know all this stuff. No idea why as no local I know has managed to pass it.

Mo, I have posted that already, you can find it down the side somewhere. I failed as did most others!

Rab, You swot! I bet you lost out on the Wales question.

I got 19 correct and the Telegraph got one wrong. They spelt "Runnymede" wrong. Call me a pedant if you will but I think when devising a quiz, it's a good idea to get the answers right.