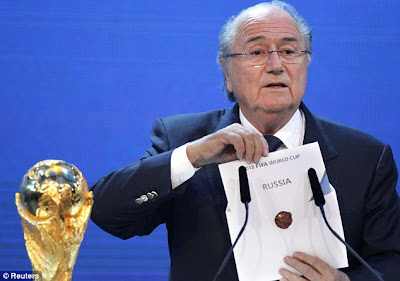 Daily Mail
So in spite of their natural inbuilt arrogance and demands that the World Cup should, in their words, 'Come Home,' England have failed in their bid to obtain the World Cup after all. Now the papers are full of cries of 'Unfair,' 'What did Putin promise,' 'They promised to vote and din't,'and 'Quatar? I thought that was an airline?' In short they feel cheated and questions are being asked about the organisation of FIFA. Imagine, FIFA being disorganised and full of cheats who break their promises? Who would have thunk it....?
There is no doubt the organisation of football associations world wide is poor. Full of yes men and 'suits' who can emit different lies with all four faces at the same time, and who's concern for the football fan is such that on occasion they have been known to answer letters addressed to them albeit with not actually saying anything within the answer! To expect the offer of a multi million pound World Cup deal, bringing foreign tourists by the thousand, huge advertising offerings, bucksheesh by the bucket-load and a vast advert for your nation, it must be expected that nations will play dirty. Such dirt can only be helped by the secret dealings on offer from FIFA itself. This group of men (Who? How many? Why?) from the four corners of the world are in an enviable position. Whatever deal is done we can never find information regarding it, unless Wikileaks steps in. Backroom deals remain hidden and far too many are known, sorry suspected of involvement in dubious practices already. Panorama recently a programme concerning three members of this committee and their involvement in alleged corrupt practices, Jack Warner, who may one day become president of this organisation, gave tickets to his son who made money from them some years ago it is alleged, and now Russia, with no infrastructure in place, has been given the World Cup! This nation, a dictatorship under Putin with Mafia connections throughout, has been deemed acceptable to FIFA? Was it roubles or Kalashnikovs we are right in asking here? On top of all this the voting is secret and lesser folks, the fans, are rarely allowed to know who votes for who. This surely is wrong? One man did admit, very proudly, which way he had voted some time back, the New Zealand member voted on behalf of the Oceania group and voted for Germany to hold the World Cup in spite of being ordered to vote for South Africa. He refused and gave his casting vote to the Germans as he "Did not wish to see a black nation holding the World Cup." As he was retiring from his post he cared little for anyone and departed with a smug smile on his face. His action almost ensured South Africa was to obtain the Cup in 2010.
Was there corruption in this years bidding? Russia has money and Mafia, Quatar has billions and also no infrastructure. It does have strict Sharia Law which will find Scotsmen drinking and revealing themselves at midday in city centres a new situation to deal with! If the Danes and Irish, Germans, Brazilians and Argies also arrive in numbers it will be an interesting time for the Islamists there! Whether the best decision has been reached is debatable, England certainly could, and I think should, have won, however at least this may lead to changes in the organisation of FIFA, if we bribe them enough!


The Sun managed one of their subtle headlines today concerning the allocation of the World Cup:-


"FIFA BUNGS RUSSIA THE WORLD CUP!"
I suppose it is worth mentioning that cheating, dishonest practice and dubious shenanigans is not and cannot be the 'British' (and I mean 'English') way!
Did I mention however that when England were awarded the World Cup in 1966 Englishman Sir Stanley Rous was President of FIFA! He had taken over from Arthur Drewery, another Englishman! Phew, at least these seasoned Football Association men were honest and cared only for the interest of the game! (Whether this includes England's semi final v Portugal being moved from Middlesbrough to Wembley is not known however?) There would have been no 'bungs' in those days for these well paid individuals!
.
Posted by Adullamite at 11:51:00

England reach a new level - they lose in the first round without even playing a game...

Mike Smith said...
This comment has been removed by a blog administrator.
8:08 am

With it often getting up to 120 degrees down there Qatar during the summer, the action will certainly be sizzling. Oh yeah, I still got it. Did you get it, 120 degrees, sizzling action? I'm a telling you, I can really crack myself up at times.

I despise football and all it stands for. At best it's a trivial activity. I'm delighted that the world cup won't be played out here any time soon.
I live in Leeds, home of a football team who have been bailed out several times by the local taxpayer, a couple of years ago they were effectively bankrupt, and of course it was suggested that the local council should buy their ground and lease it back... Like they did once before.
In any other business, you either make it work or go bust.
So, on the radio, the sports presenters saying that if the world cup bid comes through, there'll be major improvements to the stadium and its infrastructure, but no explanation of wheere the money comes from. Then, in the wake of the announcement that Mr Putin's lads have better bribes, we're told that our city council spent £377,000 on supporting the bid.
Wonderful. Well it's nice to know my poll tax is being spent so wisely.

Let's be fair. Sepp Blatter does look a little bit surprised as he pulls the name Russia from the envelope. Aren't we being a little bit harsh on the chap.

Soub, Football is the lfie blood of nations! :)