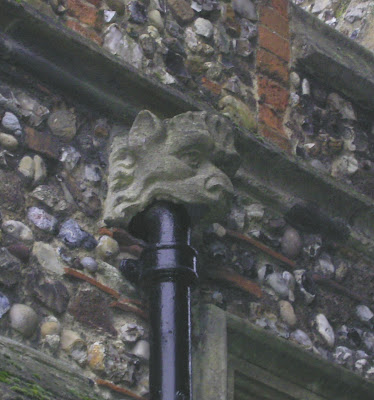 As I passed the main Anglican church the other day I noticed the gargoyles uses as drains for the first time. I have often passed by but never bothered to look closely at the fabric of the building. This is strange as I like looking at old things,(no madam, not you, there are limits!) and this church has been there since 1199 apparently but nobody told me. The walls contain the usual mixture of stones and what appears to be old Roman bricks, those thin red flat things, but I wonder if that is what they really are. The gargoyles act as drains from the roof and are somewhat spoiled by having the pipes (iron?) shoved in their gobs I think. Still anything that stops the place being ruined I suppose. I have never actually been in there but it appears to be unusual in that the vicar and his flock seem to know their God! Now that is unusual with Anglicans! The gargoyles are often worth a look. Some churches, usually the Abbeys and Cathedrals, have many and a close inspection reveals actual workers on the sight. It must be said many are not complimentary of their colleagues and some downright unfit for such a building. Worth looking out for mind.

These Anglicans do have that horrid English habit of bell ringing. Each week, or is it fortnight, a group of campanologists gather together and ring out to their, and no-one else's, content! The bells hammering away must get right up the noses of those living nearby, but as the church was there first you just have to lump it. Were you aware that Radio 4 each Sunday morning plays a recording of church bells ringing? As I usually fall asleep listening to the radio I find it disturbing, if the radio is set to radio 4, to be woken on a Sunday by these things clanging away! What is the point? It's not as if it is musical anyway, although the campanologist near you will tell of the wonderful sound emanating from the steeple. It's just a noise to me. Ah well, it's far enough away not to be a bother here. However the other Anglican church, the Anglo Catholic one, does ring bells at weddings. Why? Are we supposed to rejoice with the happy couple? I tend at such occasions to wonder how long it will last myself....

Maybe my readers are all lovers of ringing bells, I suppose then you could say I have dropped a clanger with this?
Posted by Adullamite at 16:56:00

Clanger it is, then. I like them - from a distance.

Tinnitus (pronounced /tɪˈnaɪtəs/ or /ˈtɪnɪtəs/, is from the Latin word tinnītus meaning "ringing" and is the perception of sound within the human ear in the absence of corresponding external sound.
Tinnitus is not a disease but a symptom resulting from a range of underlying causes that can include ear infections, foreign objects, being skint and walking past churches, wax in the ear, nose allergies that prevent (or induce) fluid drain and cause wax build-up.

Okay, as it's a church type post I'll own up and admit I copied it from wikipedia and added a bit in.

Have to say I always enjoy listening to church bells. Might be different if I was awoken at some awful hour, 2pm on a Sunday afternoon for instance.