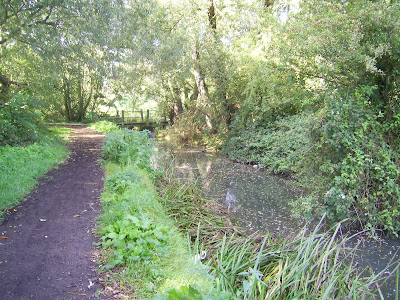 Photos can be deceiving sometimes. This idyllic setting is just behind the railway, and not far from a water sluice with a small building rumbling away. The picture manages to miss the plastic bottles floating among the green algae that covers most of the stream (which they refer to as a 'river.') and the occasional beer cans left behind by wee neds as they struggle through adolescence. Still, early on a Sunday, when the sun is shining and the sky is blue, a wander through the vegetation is quite relaxing as the only passers-by are the occasional dog walker as desperate as I, and the dogs, to avoid the crowds. Where the water is clear Mallards can be found and incredibly, on occasion, small fish are noticed, usually wearing oxygen cylinders, and crash helmets - in case they meet the beer cans! 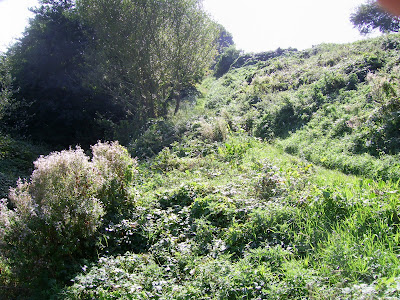 Again the camera lies, the 'river' is to the left and a housing estate just across the top of the hill. In spite of the sun, the greenery and the peace this is not a beauty spot. It is however a few minutes of nature that we all need. Isn't it funny how we need to walk among green stuff? Since around 1850 most folk in the UK have lived in towns or cities. Before then the majority were country bumpkins. We really did live off the land. In many parts of the world this is still the case, although some claim the majority actually are now urban, and I suspect, in between the aches and pains of the toil, these folks have a satisfaction in their work we do not have in towns. I am not convinced that we are made to live in office blocks or concrete jungles. 'Building sickness' is often relieved by large windows and ordinary daylight, surely this tells us something? Many find relaxation in gardening, miners often do, alongside pigeon fancying, and having your own green space, shaded and hidden from neighbours, is a strong selling point in many house sales. When Adam and Eve were thrown out of the garden of Eden they, at least he, was forced to toil on the land. Some part of us still wants this connection to the earth.
Posted by Adullamite at 21:01:00

I crave greenery sometimes! In my part of the world, we are entering the "brown phase" and will emerge sometime in April or May to the colour green again. Sigh !!

We all need to get down and amongst it sometimes.