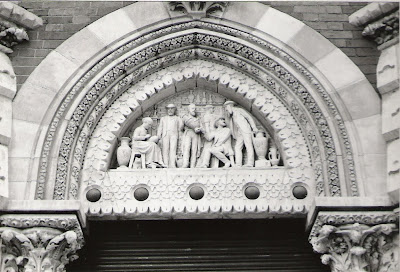 I took this pic of a small sculpture above a doorway near the Thames, not far from Waterloo station. The building stands amidst the wreckage of appalling buildings erected in the aftermath of the second world war. Bring back the Luftwaffe to finish the job I found myself thinking! However this one stands on the corner of Lambeth High Street. Old people (Yes I mean you!) will remember the famous song 'Doing the Lambeth Walk' which was popular in the late thirties. You could try it today, but not at night as you may well be knifed! I have a pic of the building itself, which while useful, does not help me understand what the sculpture (would you call this a frieze I wonder) actually represents. Enlarged there appears to be a great many earthenware urns and vases around. Several men are discussing them and one woman is seen painting one. Only one man is working, at least he is moving away from the work, and he is the only male with no beard, just whiskers and a moustache! A pottery empire perhaps? Or an empire that has gone to pot?

Fantastic Victorian over the top architecture, totally at odds with today's architects, most of whom have been brought up on Lego bricks it seems to me! The colours of the bricks don't show obviously but they stand out just as well in black & white. Whether the inside is workable is another thing, and I suspect in the late Victorian day the inside was dark brown or even darker green! Just imagine the poor facilities, the male dominated (as it should be) workforce dressed in waistcoats and jackets, with high collars and always wearing a hat and beard when they wandered around outside, pipe in mouth. When you think of it, if it were pottery then many would be cheap labour females! The men (naturally) being in charge!

How times change. Today the materials are better, stronger, long lasting, but tatty. Any of the blocks of flats nearby will be functional and efficient, although dated 1940/50's in design, but better than the buildings destroyed by the Germans however. The old blocks would have looked solid enough, and probably attractive brick like the kind shown here, even if not so elaborate. However they would have been slums by 1939 and the people benefited greatly after the war from the new buildings. Shame so many are awful now! Partly the design but mostly the inhabitants to blame for that!

While we are on, here is one from the south east, just of Tooley Street. A slim, somewhat run down building, once the home of 'Harding and Sons, Hardware Merchants,' Japanners. I did come across their history somewhere, but lost it! Efficiency is my middle name. I am not sure if the building was built at a slant, is falling over, or whether I was standing on someone at the time, but it looks squeegee to me. One thing for sure, when I lived in London there was a greater incentive to go out with the camera. In this small town most pictures are found quickly. However in the area I once lived I note a one bedroom flat, two doors from my old slum, was recently sold. The asking price £499,000. I think this a bit much for me......
Posted by Adullamite at 19:53:00

I had never gotten the connection between the grotesque architecture of today and Lego blocks before. BRILLIANT!