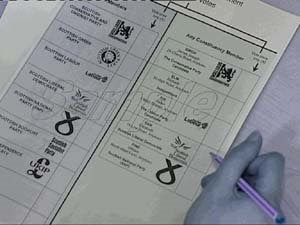 Naturally, when I awoke yesterday morning I was looking forward to a US Election less day. However the first thing on the news was the Glenrothes by election! here colour did not matter even if the Labour Party are run by an English government, no one hates the imperialist, domineering, vile, thugs, instead Scotland just wants its correct place in the world and to be treated equally in the Union, or else end it. There were no long queues waiting for hours, and certainly not in that rain, and no confusing election papers required, just put an 'X' in the box next to your man's name and there, your done! The media thought this important enough to fill the day with English based commentators telling us what this means for Scotland, but mostly Gordon Brown. Thanks a bunch, now can we go on? Well no actually.

The by election was seen as a chance for the Scottish National party to win another seat at Westminster just so they could unsettle Prime Minister Gordon Brown, and get up the nose of the Englishmen found in the House of Commons. They are unhappy that Scots should vote on English issues, but ignore the voting on Scots ones which have gone on in that place for three hundred years now. By the way 'Hypocrite' is a word not allowed under House of Commons rules. Anyway what chance had the Nationalists got at Glenrothes? Situated in the 'Kingdom of Fife,' an area famed for its coal, mines have been worked here since the sixteen hundreds, and staunchly Labour for much off that time. In 1935 Wullie Gallagher was elected the M.P for West Fife, and became one of only two Communist members of parliament! He was elected member for East Fife in 1945 but lost out in the 1950 elections. The mines were dreadful places to work in the early years of the twentieth century, my uncles worked down there and never allowed their sons to follow them, they were forced into a trade of any description to avoid 'going down the pit.' Naturally the Independant Labour Party and the Communists were strong in Cowdenbeath where they lived, and a fair equality for all was the watchword, and reflected they way they lived. Doors were never locked in mining villages and towns. The mine owners were greedy hard hearted men and the general strike of 1926 left mining towns bereft for six long months. Winston Churchill was the man responsible for bringing the strike to an end, although fellow members of the Trades Union Congress had run back to work within a very short time, and even Churchill began to hate the mine owners. At that time he suggested nationalising the mines, an idea rejected by his fellow cabinet members, but when back in power in 1950 he made no attempt at denationalisation. No 'Thatcherite' was Churchill, he believed the workers ought to be well treated unlike the mad Baroness!

With such a history throughout Fife it leaves a mark and there was little chance of the SNP actually winning. Good work by Labour brought a result, rain kept others indoors, and a fear that the breakup of the Union may not pay worried others. I note today that the media are struggling for any worth while news. They will be glad the football is on and that can fill up the spaces!
Posted by Adullamite at 11:06:00