What Time is it? 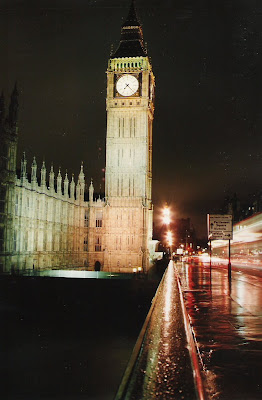 I ask because it says on my clock, well one of them, that it is eight o'clock.The rest give various readings as the batteries are dying or I set them wrong. Yet on BBC 2 the 8 pm programme has not started as the previous one is just finishing. On Channel 5 however their 8 pm programme is under way! I notice that more and more on the TV and the wireless, time is moveable. How come?

In days of yore we always had the time spread throughout the nation accurately. This was done by broadcasting the chimes from Big Ben in London, and this gave an accurate gauge of the time. Those of us brought up with the resounding chimes of the big bell high up in the clock tower cannot forget the sound. Some of us have got our hearing back again! Until the seventies this country was limited to the BBC output on radio. Since then a wide variety of stations have appeared, often broadcasting hours of music, banal, raucous or just not what I desire. Some are worth listening to, but only some. I should point out the bell that chimes is called Big Ben, not the tower in which it is housed. It is thought to have been named after a fat (what the politically correct call 'obese') member of parliament called Sir Benjamin Hall the first commissioner of works. However while he was known as 'Big Ben' in the house there was a famous boxer of the day who fought his last fight at the time the debate on naming the bell was under way. Boxing was a massively popular, and violent, sport at that time. Radio 4 still uses the chimes,certainly at six o' clock and midnight, but no other station bothers. This means one mans midday is another's one minute past, and why is it I ask, that 5Live never give the news on the half hour? They appear to insist on leaving it till several minutes past. Crazy nonsense.

The reason I am annoyed is that we need an accurate time signal, and the one on the telephone, (Dial 123) and a voice says "At the third stroke the time sponsored by 'Accurist' will be...." but the media folk do not comply with Post office time, sorry it is 'Telecom' now, privatisation! This is important if I record a programme on the radio, yes I use cassette tape I live on the cheap and use technology I can work, and all to often I find a programme begins too soon and I find several minutes of turgid blether and worse it sometimes cuts of before the programme ends. In most things such accuracy is irrelevant for most of us but I would like to know that the hour on one TV channel is the same as on another. BBC 1 and BBC 2 appear to live in different time zones yet they arise in the same building! I can understand the BBC World service being an hour behind, they remain on GMT throughout the year, but how come the over paid members of the Beeb, paid for by my licence fee, cannot line up two channels at the same time!