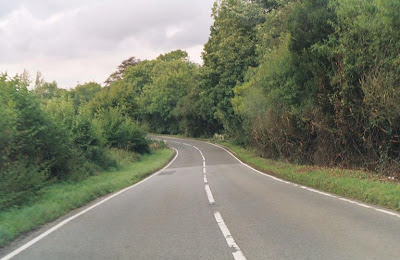 Much to my surprise the driving instructor phoned yesterday and offered a lesson today, a bank holiday. Having missed two in a row because I was dying from the ever present filthy bug that refuses to leave me, in spite of medicines, prayer and cursing, I was pleased to have a go! As it was a day off for the world I rather hoped the roads would be empty, wrong! it appears that the day brought many out. Cyclist clubs were found in groups of seven or eight blocking roads wherever they could, motorcyclists, who love the windy roads, gather at Finchenfield, 'England's prettiest village' they say. It is lovely indeed but full of all sorts of bikers filling The Fox,' and I had to go through them. The village contains a pond, ducks, the pub and an overpriced antique shop, and also an ancient bridge over the stream. This I had to cross twice, and you only have priority one way. Naturally as I approached some nyaff shoved through and nearly caught us. As there was only an old wifey on the bridge coming back I didn't bother to slow down - she can swim quite well you know!

For two hours I crunched the gears along these pretty roads, passing all sorts of aged cottages, many thatched, all brightly painted and probably very attractive when the sun shines, and only twice did I come across Mr Impatient. On the first occasion he raced past just as I glanced in the mirror thinking, 'Only a fool would...' and he did! Later I was trailed by a lass in a red 'Micra.' That's a car, not a skirt, and I noticed a sensible gap between up. Then along he came in his black Willie extension and I noticed him force his way between us. This often happens when I am near women. Naturally I thought it was the police, it usually turns out to be. Anyway just as we approached a hill with a bend he went for it. Whether he noticed the car coming over the top I don't know but he made it, just! Already I am amazed at the patience of most who drive and the foolishness of others.

Still, it was fun today. The back streets are enjoyable, although the sharp right and left turns through villages, the cars parked in exactly the worst spots in said places, the occasional tractor and junctions round which it is impossible to see - and not helped when you leave the handbrake on - do keep you awake. I write this simply because since I returned I have still got the road flashing in front of me. Like my life, it takes longer to flash past than it used to.


The picture is found on an excellent site called Rural Roads. Well worth a look.
Posted by Adullamite at 13:44:00

"Then along he came in his black Willie extension and I noticed him force his way between us. This often happens when I am near women."

Haha, very good! Sounds like quite a pleasant day in all.

Anonymous said...
This comment has been removed by a blog administrator.
1:39 am