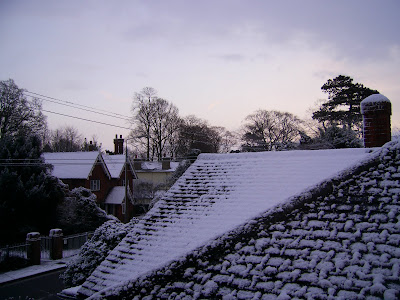 Now I am not one to complain, but when I threw off the duffel coat, removed the anorak, dumped the three pullovers, two rugby shirts and two pair of hikers trousers, along with the four pair of socks and the pair of army boots, I then climbed out of bed to be greeted with several inches of snow! After rubbing myself down with whale blubber I donned the several layers required to stay alive while sitting at the PC and chipped the ice of the window so I could see out. All night the gales had been blowing leaving a blanket of the white stuff across the region. Cars have been stranded, trains delayed airports closed and several husky teams have passed by. Polar explorers aiming for the Antarctic and a flock of penguins were seen in the High Street! This of course has led to headlines about 'CHAOS,' and 'End of the world!' Not that the papers ever exaggerate! 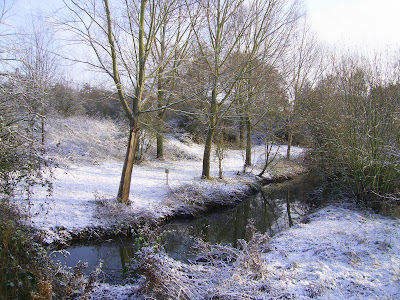 However as I ventured out this morning, without ski's, I was aware of how icy the pavements and roads are. The main roads are cleared of course but the side roads remain treacherous, and few venture over 20 miles an hour there. Kids were happily throwing snowballs at helpless old women and breaking the windows of passing cars, white van drivers were out to prove that they were not intellectuals by speeding along side streets, and doom merchant turkeys are wandering about the farms crying "The end is nigh!"

As the sun shone and the blue sky glimmered above, and a few birds braved the cold to find lunch I, naturally, was busy falling flat on my backside while crossing the road! It is always a dangerous corner so I went for it and soon found myself in the gutter. 'Home Sweet Home' a passer-by muttered as he passered-by. Now my wrist is slightly aching and in the morning will be as stiff as a Taliban after the PWRR have passed by.

Now I am not a killjoy but finding my great niece is so keen on this snow stuff, and just as well according to what is going to hit them tomorrow, finding her enjoying this horrid weather and praying for more irks me! While I lay under seven feet of blankets last night she was busy in the back yard as the horrid stuff fell! Looks like her dad right enough!
Posted by Adullamite at 13:11:00

Wow, you better watch out there, someone might get a sniffle or something... or slip on a slight patch of snow... oh wait did I say slight? Yep ;) hehehe