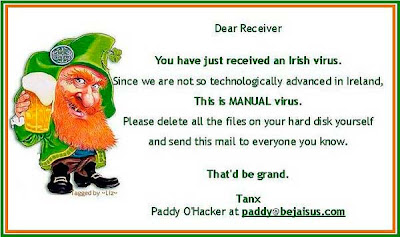 A small two-seater Cessna 152 plane crashed
into a cemetery early this afternoon in Ireland.
Irish search and rescue workers have
recovered 300 bodies so far and expect that
number to climb as digging continues into the evening.

Rather typical of the type of Irish jokes we all hear from time to time. Some people get upset by such jokes, although Scots jokes rarely upset me at least if they are funny that is! There are those sensitive folk who think such things racist or unpleasant.Usually I find them to be white, middle class, liberal, females with as much understanding of life as a, well, a white middle class, liberal, female! Rarely do Irishmen get upset! John O'Toole is a good example. This hard working man and I used to slog it out together and on many occasions his humour would show through that beer stained brain of his. "Can't you hear me looking at you?" he said on one occasion, causing us all to wonder if he meant it or not. But not all took his easy going way. Having a female boss is not always the best situation to be in, and Vera was a lovely Irish woman who kept the eedjits in order when the broken leg forced me into the dreadful office. Apart from when I held her hand and told her how I loved her sparkling eyes when she yelled at me we got on well. She did get upset on one occasion however, the drawing of a boat with 'Irish airliner' written beneath. At least I think she was upset for I found myself on a barrage of office desk furniture. Maybe she was just 'touchy' that day?

All nations have neighbours they refer to as 'daft.' In this case I suggest the influx into Britain during the Irish famine in 1842/3 probably is where the Irish began to be regarded as stupid. A great many hungry folks came from outlying country areas, black houses roofed with turf of a type not seen in England (Similar existed in the Scottish highlands), and for the most part speaking Irish Gaelic, it would have been easy to regard them as dumb! Their lack of sophistication, lack of knowledge of the 'modern' towns, and unsure of the ways of the people around them would leave them open to abuse. Today it is a gentle humour, banter in fact, in the 19th century it was more aggressive. The Irish like the Jews arriving in London earlier, were immigrants and that always causes opposition. Muslim and African immigrants today, and in many cases Poles and East Europeans suffer in a similar manner today.

Scots jokes are of a different kind. A look through old copies of 'Punch' magazine show that before the Great War Scots jokes were mostly concerned with drink!

Many 'Punch' cartoons were of this type. Quite a number featured the 'Gamie' or 'gillie' sarcastically encouraging the hunter, fisherman or golfer on his way round. Later however the idea of the mean Scotsman appeared.

Possibly this was the fault of Aberdeen! (Can anything good come from there?) During the 19th century British towns and cities grew apace and as wealth grew so did civic pride. If Huddersfield built a new town hall Bradford had to build a better one and so on. Aberdeen built Union Street! This long street was created with granite stone, which cost a fortune. The story goes that Aberdeen then became bankrupt and to this day tales of mean Aberdonians abound. I of course cannot tell any, although on my last trip there I noticed the 'Pittodrie Bar' was celebrating their hundredth year. The celebration involved selling beer at the same price as on opening day in 1898! A wonderful idea! I went along and found the place deserted! I was surprised as there were hundreds of men outside. Naturally I asked the barman, as I paid my penny halfpenny for my glass of stout, "Why are they all waiting outside?' He glared at the door and in thon strange dialect murmured "Och min, they will be waiting for 'Happy Hour.'

I reckon Harry Lauder,who was knighted after his many efforts entertaining the troops during the Great War, was responsible for the mean Scotsman. Watching an English singer in an Edinburgh music hall he decided he could do better. He invented the man in a kilt, crooked walking stick and notorious meanness which lasted all his career. He went so far to obtain great publicity in New York in the twenties by tipping the hotel doorman a sixpence! The doorman cried blue murder, as Harry had paid him well to do, and publicity was assured. It is not just 'B' celebs who know how to get noticed!
His act has left all Scotsmen, the most generous folk in the world, with a reputation of miserliness. While some are indeed careful with their money, and with recent news of the Scottish banks being run by money grabbing incompetents who can blame them, all Scots remain the most generous in the world.

er..., must go, I see the landlord has come for the rent and I must stop typing in case he realises I am in.

The virus one is absolutely side splitting!!!!

What a great read! Stories like this should be published in newspapers.

Ha ha, well I did say Balamory was disturbing in a Scottish type of way, so that's 1-1 Mr. Adullamite!

Sir Graham the Adullamite, I Would like to let you know you have recieved an award from COH