The City, as Was

Nothing much has happened recently, apart from temperatures heading for the 90s and everyone being sick of the liars contesting the Conservative leadership.  More noise about high energy prices, indeed Boris reappeared at a meeting of energy bosses in No 10.  Nothing happened bar him getting a backhander or two I suspect.  He certainly did nothing for the cost of living increase, however, his lackeys at all levels are keeping up the pressure to bring him back.
The drought has been declared, so I will cease from washing, though I have done one today.  Tesco and washing sheets, my life is so full!
At least football is back, though to be honest it means little these days.  So much around me has little taste today.  In fact nothing tastes, that is, it means little unlike in days gone by.  Age is having an effect.  I have no problems disliking things, so much I see is trashy and worthless, though my forefathers must have felt the same.  The 'shiny' things of the world mean less as time passes, though if I were to obtain a large source of wealth my ideas may differ.  This of course is unlikely.  So, I will just remain here, a miserable old goat.  A position, I have been told, that suits me admirably. 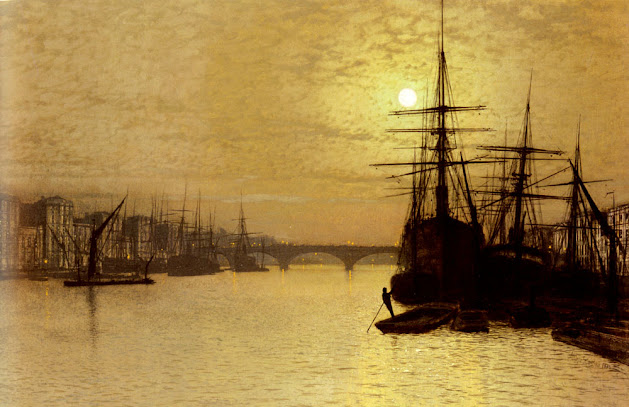 Atkinson Grimshaw - The Thames Below London Bridge
Posted by Adullamite at 17:31:00

Very much enjoying the pictures you have been featuring.
So much seems so meretricious, doesn't it.....

Fly, The pictures are good I must say.

Fly, I thought he would like it. Is it his "cough" generation...?