St Margaret of Antioch
You would think, looking at the Anglican Church, St Margaret of Antioch, in the village of Stanford-le-Hope, that you were in a 'typical' English village.  Certainly not far away lie fields, and indeed a river, but the river is the River Thames, which carries the new 'London Gateway' container port terminal just down the road from this village.  Once an Essex rural site now it has become at best commuter land for the big city or the huge works nearby, both industrial and shopping.
St Margaret herself goes back around a thousand years as such churches tend to do.  Rebuilt and added to many times it has seen Essex life grow around it.  Rural deprivation, nearby 'Fobbing' was a centre of the Peasants Revolt not long after the great plague.  The usual upheavals, a war memorial in town centre, and now commuter land and a rising number of houses, many since the 50's and 60's.  Not much of a village today but elements remain.
St Margaret herself was supposedly martyred in 304, if, that is, she actually exisited.  Some of these 'saints' are not what they were you know.
From here UPS despached their van at 6:30 this morning to rush a parcel to me.  Where once such vans encountered a long line of traffic heading into London now they meet a long line of parcel delivery vans rushing back and forth, all seeking to deliver too many parcels in too short a time.
I went through several links before I found the UPS page that informed me when the delivery would be made.  DPD, if you remember, gave me not only a one hour slot when the delivery may arrive but a wee map showing the drivers progress.  UPS, when I eventually got to the page having 'signed in' again, told me the package was 'Out on delivery' and would arrive, 'near days end.'  Very helpful!  As it was the driver, who made me feel slim, told me he attempted to finish his individual drops by lunch time, and he arrived at around 12:30, and clearly was happy to almost be finished.  'How is Stanford?' I asked, 'Bloody Hot,' he replied.  It was very hot outside today.
I remained busy indoors. 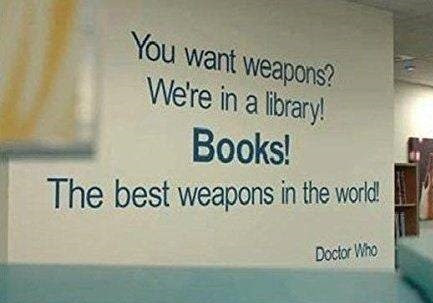 In spite of 'Lock Down' or indeed this more open regime I still find how little I am reading books.  Quite why I do not know, but they not only pile up all over the place, half read, unopened, or just gathering dust, but there is little desire to look inside at the moment.  Latop problems do not help, weariness that has hung over me does not help, but just getting involved in the books remains difficult.  Those with small fonts and 700 pages of big words can be easy to ignore.  However, even those written easily are hard to pick up.  My weaak brain is dying, I think it is the lack of football has bruised it somewhat. 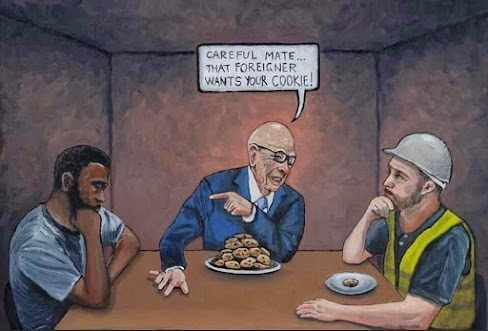 I found this cartoon quite revealing.  How the media have used this lie for many years.  While the nation is standing on the beaches with Farage repelling asylum seekers in rubber rafts the Press Barons continue to lien their pockets, move the goalposts, inform Prime Ministers what they are to do, and sit happily surrounded by lackeys yet with no life, in spite of their money and power.
Spending your life being important and powerful might bring a thrill but if it rots the world around you it leaves nothing behind.  I did read one portion of Paul Theroux travelling in China some years ago.  He went to Chairman Mao's birthplace and found it deserted.  While some years before the Red Guards had flocked in their thousands to his birthplace it was now a lonely museum, even the shop had no postcards of him, nor any of his 'Little Red Books.'
Ozymandius came to mind.
Great power can change the world for good or it can destroy it.  Mao, in spite of the present 'Communist Party' name has been forgotten and discredited.  His understanding, and cruelty, challenged millions but it was his successors who turned China back into a really powerful state.  His legacy is empty.  The Press Barons end will be the same. 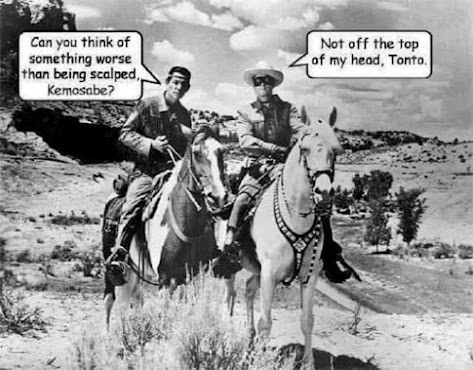 I think I remember that quote from Dr. Who, I believe it was the David Tennent Dr. Who. Could be wrong.
Also, the Lone Ranger cartoon...there is a small Baptist church near my aunt's house in North Georgia. I went there quite often as a child. It was (and still is) called Chopped Oak Baptist Church. I just learned recently the reason for the name is there was an oak tree there and the settlers chopped a mark into it every time the native Americans scalped someone. Georgia was just like the wild, wild West in the early days of its history. (Nothing against the Cherokee who lived there, I have some Native American in my genetic make up.)

Any chance of another Peasants' Revolt after this blasted bug?

Fly, There are enough peasants here willing to join...