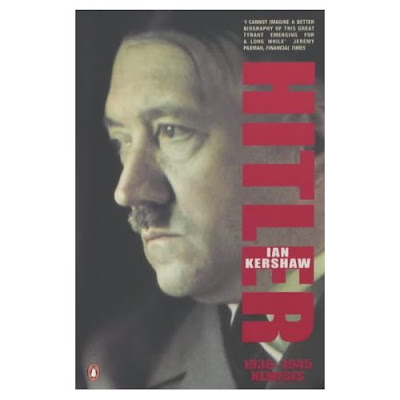 Amazon UK
After I broke my leg (Thanks Charlotte!) I recuperated by reading William Shirer's 'The Rise and Fall of the Third Reich.' This started me on a trek through many books in an attempt to understand the reasons behind Mr Hitler's actions. Having grown up during the 50's I was always aware of the Second World War (we ran around the playground in 1956 chanting 'We won the war, in 1944). All adults had been involved in some way, reference was constantly made on the wireless, some BBC programmes linked soldiers in occupied Germany with home, and comics and films were naturally dominated with warfare. While Britain slowly recovered, all Britain got from the was was a moral victory for 'standing alone' and bankruptcy, the NHS created, main industries nationalised, and vast numbers of houses built, the war nevertheless weighed heavily on many people. How heavy it must have weighed with the single woman next door and her two year old daughter was seen in the routine visit of the milkman to 'comfort her.' Not far from us stood a rusting anti aircraft base, bus conductors were often 'Poles,' who had remained after the conflict, although they may well have been from the Baltic States, and our main games often involved guns of one sort or another.
Since reading Shirer's book I have read many others, far too many my brain tells me, and recently I acquired (free) the second of Henshaw's great work on the man. 'Hitler' Hubris' was the first and details his early life and rise to power.  I confess I struggled to finish this excellent tome and I strongly suspect that the author was feeling similar thoughts as he ended his years of study. The writing as the book draws near the end gives the impression he wanted to lie down in a dark room for a year! I know how he feels.  Three men stand out when in comes to such study, Ian Kershaw, Alan Bullock and Lawrence Rees. All three have studied diligently and produced works that aim to explain the Nazi era in both a scholarly and readable manner.  The facts are presented without hysteria or embellishment, nothing is hidden or glorified. All are worth reading and also Rees has produced a great many TV programmes that are available on many aspects of the Hitler years.
The Nazi Party took power in 1933, it crashed into oblivion a mere twelve years later. During this time a well educated, highly sophisticated nation gave itself over to one man. One man who in his short reign occupied Austria and Czechoslovakia by sleight of hand, and Poland by force and trickery. His incredible failure to understand the British mentality, he wished Britain to keep her Empire while Germany ruled Europe, and his belief that if he defeated the easier option (Soviet Russia) Great Britain would offer peace terms! With great encouragement from the army and people who disliked Poles Hitler was allowed to introduce the vicious policies that were to lead to such suffering in Russia and eventually the Gas Chambers. Indeed at this point while most wanted an end to the war, the RAF were dropping bombs on all main cities by now, the idea of defeating the Bolsheviks was very popular throughout Germany.  Of course it failed, nobody can defeat the Russian winter, and the land he sought to conquer ended up as Stalin's property. An all or nothing policy that failed completely.
Germany had for a very long time a belief in its superiority, and after the end of the Great War many chose to believe they had indeed been 'stabbed in the back' by Communists and others and not defeated at all. The short lived democratic government failed after the 'Wall Street Crash' and the Nazi's took advantage of many attitudes at that time to take power. Hitler had great support from his people and had he died in 1940 he would be seen by them as a political hero who made Germany great again. The war had to be fought to a bitter end to finish once and for all the 'master race' attitude that lay in the psyche of the nation. Only such total devastation could end this for ever. the ruin of the country millions dead, Twenty million on the Eastern Front alone, and the majority of the leading men committing suicide or being hanged after war's end.  A sad end to a sad story.
And as to finding out what motivated Adolf? I still don't know! So many things affected him. His nature, his bullying father, his protective mother (he kept her picture with him all the time, even in the bunker. She died when he was in his teens) his laziness, his failure to get into the academy as his art, while picturesque, was not of a high enough standard, and the Great War in which he found himself a purpose.So many things added to his 'Germanic Consciousness' and unstable personality to produce the man. The state of the nation, the somewhat twisted heart of Germany, added to this and circumstances arose, and were manufactured, to ensure one day Adolf Hitler had millions of Germans at his feet in adulation!  It shows once again how easy it is for unstable and dangerous people to rise to the top in any society, none are free from this danger.
Read this book, although beginning with the first one, 'Hubris' is the best idea. Very thick books which give the definitive tale of Hitler and the Nazi Party during these years. There are other good books already mentioned but this is the place to begin.

I'll look out for both of them.