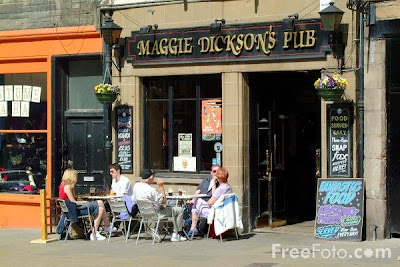 'Half Hangit Maggie' was the term given to one Margaret Dickson in the 1720's.
As a young lass in 1723, possibly only eighteen years of age, she was deserted, or dumped, by her husband and moved from the fish selling in Mussleburgh to the border town of Kelso. Here she found employment in an Inn and settled for a while. However a woman's needs are manifold and she fulfilled hers with the son of the Inn and fell pregnant. Divorce was not an option, so pregnancy at that time was unwise. To avoid being thrown out she concealed the growing bump although surely someone must have noticed? Such anxiety must have contributed to the child dying shortly after birth. Maggie attempted to hide the child's body by drowning it in the River Tweed but could not bring herself to do so and hide the corpse by the river bank.

Once discovered it did not take long to trace this child to Maggie and she was taken for trial in Edinburgh where she was sentenced to hang. Today I fear she would be given counselling and if thought cruelly guilty possibly an 'Anti Social Behaviour Order' or maybe a fine. On the 2nd of September 1724, the family alongside the Edinburgh mob attended the gibbet in the Grassmarket. There the lassie was hanged for the correct length of time, and to ensure completion the executioner pulled down on her legs to ensure she was dead. How often he must have done this, and one is left wondering what such an occupation did to his soul? In recent years hanging was confined to murder but until the early eighteen hundreds many were hanged for minor thefts and even debt! What went through the minds of men employed in such work?

In the seventeen hundreds anatomical research in Scotland was limited to freshly hung criminals and as Maggie was taken down and placed in the coffin her family provided there arose a stramash as medical students attempted to obtain her body for dissection. I suppose a twenty two year old female body was worth further inspection, even after death! The crowd intervened and the trainee doctors were disappointed, however some report damage to the coffin because of the struggle. I suspect coffins were somewhat 'cheap and cheerful' (Is this the right phrase?) at that time. There is a reasonable distance to walk on the journey to Inveresk churchyard, where she was to be interred, and the mourners were glad to stop for refreshment at Peffermill. Passing workmen heard noises coming from the coffin and were, not unnaturally, intrigued! The lid was opened and Maggie, somewhat confused sat up. The reaction of those around her does not appear to have been recorded however some astonishment may have occurred! Blood was taken by a phlebotomist, 'blood letting' being seen as a regular cure at the time, and under orders of the local magistrate she was taken into Mussleburgh where she spent the night. For a few days the lass was somewhat delirious and confused and complained of a painful neck, no surprise there! However Margaret managed to visit the church on the Sabbath where a large crowd attended, less to worship than to 'see the show!'

Here the difference between Scots law, very influenced by Calvinistic biblical interpretation, comes ahead of English law which is influenced by, well, Englishmen! Under English law she would have been strung up again with no hesitation having been condemned to 'Hang by the neck until dead.' However Scots law states that once the condemned has been hanged they are declared dead in law, even if they survive. This result is seen as 'Gods will' and the survivor is allowed their liberty once more. In England you had to survive hanging three times before 'Gods will' is known! Such death, being death, also leads to the annulment of marriage, (Don't try this at home folks!) and no doubt many other legal niceties. This being the case, and her celebrity riding high, her husband reappeared and married her once again a short time later. (Girlies may now show some indication of their contempt for men!)

Naturally stories grow around such celebrities. Some say she had become a 'good friend' of the man who made the rope used for the hanging, although this sounds rather typical of the normal Edinburgh folks reaction to such a situation. Some Scots can develop a certain cynicism as the years pass by would you believe? Maggie continued to live, some say for another forty years and is reported to have been around in 1753. Her occupation is unclear, some say she sold salt around Edinburgh and others report the lass as running a tavern somewhere. However she filled her years she had a certain celebrity becoming known as 'Half hangit Maggie!'

Hmm, thinking about hangings... Are you really that despondent over having to pay too much for not enough of a printer? Of course, if you marketed it right, the lovely Mrs. Adullamite could probably purchase a mighty fine printer with the proceeds from the ticket sales of such a spectacle.

Just stopping by to say Hi...

The grounds of Peffermill House, hosted the Ram's Heid Inn, the hostelry where the coffin bearers stopped for a "light refreshment". It was here that Maggie Dickson resurfaced and as a tankard of ale was thrust into her hand to help "ease her constricted throat", she burst into song, immortalised by the words, "I'm Alive ..."

The whole song can be found on Craigmillar Gold, a collection of songs from Craigmillar musicals.

Yes it's true! Peffermill is part of the infamous Craigmillar But we had a thriving community of art, theatre and musicians, who shhok off our "bad image" and made our community world-famous by social action through crama.

Half-hangit Maggie Dickson was a small, but important part of our community history!

"shook off our "bad image" and made our community world-famous by social action through drama ..."

I've researched Maggie's life for many years now and have just completed a novel about her which is available to read on authonomy.com "The Hanging of Margaret Dickson" by Alison. J Butler.
The contents of the blog are quite accurate and I'm impressed, however the anonymous one stating she burst into song is perhaps incorrect, as all historic documents state she came back to life outside the Sheeps Heid in Peffermill and that even though she did become conscious she was delerious for days, which is no wonder considering what she had just gone through.
One more interesting fact... and i have documentation of this (a birth cerificate). Maggie Dickson gave birth to a James Spence 10 months after her hanging... the child was fathered by her very forgiving husband.
Regards, and check out my book... I need backing for it to be published. xxxx

I am not one for novels to be honest, I prefer the real world, but I have found your book and give it a go!
Good luck with that!

If anyone's interested...The Hanging of Margaret Dickson has been published as an ebook on Amazon.com.(not amazon uk)