Dmitri and the 'Leningrad' Symphony Book. 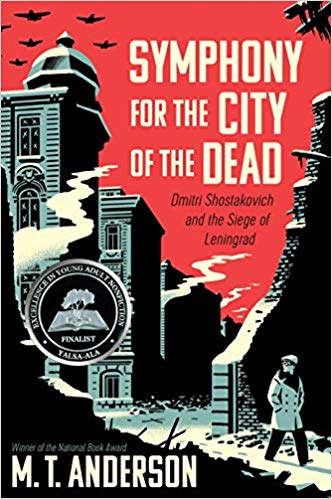 Most are aware of the Nazi's long and ultimately failed siege of Leningrad during the Second World War.  Few go into the details as the descent into deprivation caused by hunger, fear and human nature is not always good reading.  There is much in this book that would put you off your lunch.
The author, an American who thinks 'Football' is called 'Soccer,' has made use of several books concerning his subject, almost all of them untrustworthy.  Being brought up under a Stalinist regime means nothing is clear, nothing is truthful and desperation for survival brings lies and guilt which breed more lies.  Therefore we have a biography with limited primary sources, and those debatable.
However it is clear he was born into a middle class home, grew up during the First World War, saw his father participate in the revolution, endured life as a competent composer while Stalin took power and invoked the 'Terror.'  Then, after experiencing 'Terror' himself the Germans invaded and soon Leningrad his home was under siege.
I found the writing easy in this book.  The descriptions of the 'Terror' of the 30's is clear, we all know about that, and then the details concerning the surrounding of the city and the description of the struggle for survival while appalling at times straight forward and ghastly.  The dead mount up, starving people turn to robbery or cannibalism, yet others join together to eke out the little they have, not counting the Communist leaders of course who did very well.  The struggle shows how low the human nature can go, it also reveals the height some reach in aiding one another.
Dmitri Shostakovich continues to write his music through all these troubles.  Rising to fame in the 1920's with appropriate songs for the revolutionary times, amended to fit the Stalinist realism of the 30's, it saved him visiting the Gulag.
One aspect of the story is his desire to help others in any way he can, however at many times he has to say and do things with which he disagrees, he faces opposition from Stalin himself at one point and gets very near his end but survives.  On one occasion he is brought into the centre jail and asked to inform on people he met at a party.  He cannot as they have not sought to rebel.  He is told to return next day ready to admit their fault.  He arrives and is kept waiting.  Eventually he enquires of an NKVD officer as to what is to happen.  It transpires nothing will happen, the officer who threatened him the day before has been arrested and shot.  All his meetings have been cancelled!  Dmitri goes back home and hears no more about it.  Such was the Soviet system in the late 30's.
With his city suffering he begins a symphony designed to lift the nation.  Eventually news of this leaks out and he and his wife and children and removed far from Leningrad.  Here he finishes the symphony and sends it back to be performed in the city itself.
The orchestra has of course been dying off.  Most remaining, about 15 of them, were starving, those brought from outside, including members of the army bands, were also malnourished, and a terrible scene reveals the desperation to rehearse the music.  Eventually, once the music has been exported across the world and played in London and New York to a world audience awaiting encouragement from Russia, the war had yet not turned in the allies favour, the Leningrad Symphony was played in Leningrad.  At the time the book claims this alone inspired the Soviet people in their war against the fascist aggressor.  Because the Germans were.  'National Socialist' the Soviets hid this by calling them 'Fascist.'
After the symphony was played things began to turn.  In late 1942, before the playing of the work, British Empire forces had won at El Alamein and began clearing the enemy from North Africa.  Soon after the inspiration of the work the Soviet forces began to end the siege and within a year the city was damaged, haunted, full of guilt and fear, but free from German oppression.  The book likes to claim much credit to the music for this result.
The result of the war is well known, it was in all the papers, yet even after the war Stalin sought a 'terror' once again in which Dmitri and his music became criticised.  He survived, just, and eventually died in his bed in 1975.  It took me a week or so to read this book, what with coughing and straining my muscles.  It was an easy read in spite of the Americanisms within and well worth a go for those interested in composers like Shostakovich.  The book shows how much of his work arose in dire trouble and reflects the society in which he lived.
This book was a Xmas gift from my beautiful and intelligent piano playing niece.  She also sent me the music CD to go along with this book.  Clever girl!


Sadly not the St Petersburg Orchestra  have, but this will do.

I shall play this tomorrow...just recovering from all our lights going out and the electrician who turned out - a neighbour -telling us the place could have gone up in flames! Would not take any money for the first emergency repair either...

Fly, The CD was better than I imagined. I like your electrician!

So do I. He came back today, sorted it all and still refused to charge as he was a neighbour and used material we had. CD wil have to wait until tomorrow when i can listen to it in peace.