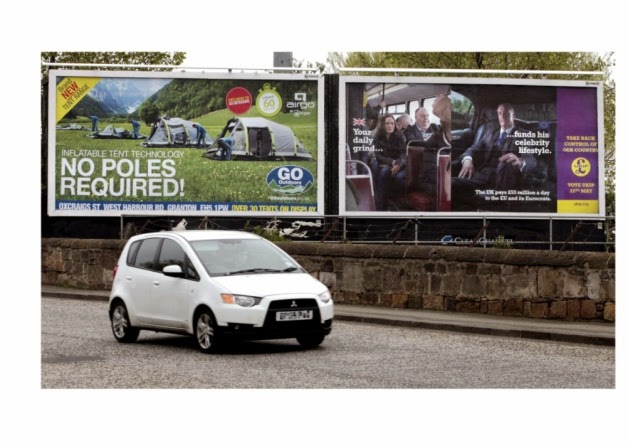 This is a scene in Edinburgh's Granton area a couple of weeks ago, it may still be there.  The UKIP poster, (United Kingdom Independence Party with the UK to leave the EU, and many consider them racist for not wanting high immigration) is found planted alongside an advert for tents claiming 'No Poles Required!'  There has in recent years been an influx of young folks from Poland into the UK leaving some to demand whether these posters placed side by side was a deliberate act on someones part.  I doubt it, but even so, it is quite funny.
There can be no doubt immigration is a big issue today.  However who knows what the actual numbers of immigrants actually happens to be?  Government figures cannot be trusted, even by governments, UKIP or any other lobby group certainly will not tell the truth, and the only fact is that the entire UK is overcrowded.  However, once Scotland becomes independent you will note only England, and Wales, become crowded, Scotland having masses of highlands bereft of life bar English incomers looking for a better world.  UKIP remains an England First Party, probably some members are racist, some certainly a bit loopy, however many similar remain within the Conservative Party but the papers do not mention that, certainly not during the lead up to an election.
The European Election is with us in 20 or so days.  We ave the opportunity to send people into obscurity on vast wages, huge expenses, long hours of wasting everybody's time, and changing not one iota of life for you and me as far as I am aware up to this point.  The EU is such a farce. The accounts have never been signed off for 20 years, nobody knows where the money goes, few if any care or understand the financial side, yet nothing is done!  Talk is loud now, action unseen tomorrow.  Laws are passed, ignored by France, yet important here!  It is time for a rethink.  Let us work with Europe, but not in a Federal state.  Let us trade, help, aid, develop the poorer parts, but first let us remove the millions earning vast sums in Strasbourg, Brussels and wherever else they dwell.  I'm thinking of voting either 'Green' or 'UKIP,' as both would serve them right and keep them away from us!

Being a bank holiday, in which everyone bar supermarkets and greedy shops take the long weekend off, there was nothing happening today.  This made no difference whatsoever to this small town!  Actually it does, most shops shut, businesses closed and many took advantage of a reasonably warm day to clean the car, go visit in-laws, or even have a happy time.  I did nothing, so no change there.  The bright blue sky caused me to cycle up the old railway however, puffing up that slope far more than any F5 engine ever did I can tell you. 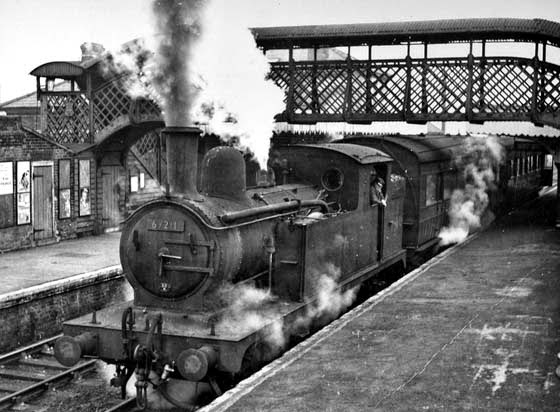 Pah! You call that steam!
Clearly this is doing me good health wise, or so they say, but it did not feel this way at the time. There were few about, which always make it worth while.

The morning sun makes me want to take pictures but there was nothing but this aged gate, once entrance to a busy coal depot, the only interesting object on view.  I can tell it bores you, it did little for me.  However this depot must have been important in the coal fired days.  Every house required coal, all stations along the line had similar layouts busy with bags of coal being transferred to lorries and taken to almost every house in the area.  I say almost as with all the woods around in the past I suspect many chopped their own for the fire, saving money and keeping fit.  Today we just turn the switch and grumble at the power companies ripping us off. Where are all the old coalmen now?  Dead I suppose. Any living will be well into their eighties, probably older, but I suspect still fit! Jobs come and go with the change of lifestyle yet as far as I know few tears were shed for coalmen who lost out to the Clean Air Act.  Yet for well over a hundred years such men kept the nation warm, industry working and when stocks were low suffered the abuse for something they could do little about. Now they are forgotten.  So many old jobs once commonplace have gone in fifty years.  Factories, railway sidings, once the employer of thousands now turned into small shops, scout huts or out of town supermarkets.  How quickly we forget.

Do you know muscles used rarely hurt when used?  As I write this rubbish my muscles are informing me of this very fact.  When I rise in the morrow I wonder if they will remind me then also.....?

I think you're being a bit unfair with the "greedy shop" comment. The owners are probably working hard to make a living; and are working hard on a holiday because those others who are enjoying a day off from work feel the need to shop!

It never ceases to amaze me how some folk can't survive a day without having to shop! If all the shops closed the public would kick up an almighty fuss thinking their throats were cut!

When we were kids everything closed over the Christmas period, Easter and public holidays. Mum and Nana seemed to be able to have enough food in the house for last us over the duration...and we didn't even have a refrigerator in those days...just a hanging safe under the house to keep food cool and an ice chest upstairs.

I remember coalheavers...with their distinctive headgear.
Houses in town often had coal holes where the black diamonds dropped from the sacks into a cellar.
Otherwise the chaps would carry the sacks round the back to be stored in concrete bunkers with a hole covered by a plate at the bottom wide enough to take the shovel which would fill the coal scuttle...

What annoys me is that now that technology has provided us with the possibility of clean coal fired stations...and Britain is built on the stuff...the mines have been sold off to the Russians!

I'll remember I'm extinct in a minute or two...

Isn't there a law against exercise on Bank Holidays? There is here :)

Fly, Some coalmen used to wear hood like headgear, most just flat caps! We amended our coal cellar to a cupboard for filthy things.

Carol, I'm coming over there next time!

Well, I'm not a huge fan of shopping, Adullamite. The only shopping I do is my grocery shopping at our local supermarket...where I greeted warmly by management and staff.

Anything else that I desperately need that I can't purchase up here on Tamborine Mountain because it's unavailable up here, I buy online. I even bought my car online back in October last.

I hate wandering around huge shopping centres full of people...it's the last thing I want to do.

So...yes...you do now know a woman who hates shopping.

Sorry to burst your balloon re woman and all their bad habits!! ;)

While your bankers are sunbathing on some beach, our bankers are hard at work thinking of another fee they can impose upon their customers. It is, after all, the American way.

Lee, You bought a car online? You trust them!

Jerry, Ah but they do not sunbathe on beaches without reading the US financial statements, to learn how to increase their bonus!