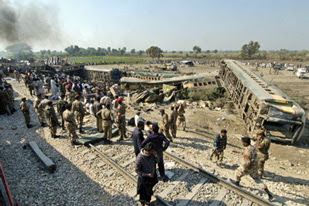 Funny how news is reported. A train crash in Pakistan gets little mention in our press, even though around fifty people are dead and almost two hundred injured. It is not important because it happened far away, and anyway Pakistan is where all the terrorists are to be found is it not? None of our folks are involved so who cares?
Some years ago a daily tabloid reported an avalanche in the French Alps which killed several and injured dozens under the headline 'Two Britons Safe!' But the short story only mentioned the dead at the end.
When Glen Hoddle was manager of England the Bishops Stortford local paper referred to him in one story, not as the England manager, but as, '...Glen Hoddle, who used to own a sports shop in the High Street...' Now I am not saying some folks are a bit introspective but.....
I did notice that apart from a passing reference nobody has bothered about the train crash, 'hands free' driving and government slackness counts for more.

As one or two of you will read this at what you call 'work,' I have come across this little game to fill in the time before you have a break. It is a simple Paper Aeroplane game, which most of my more intelligent readers will already have discovered. There should be a health and safety warning about that fan, it's dangerous!
Posted by Adullamite at 10:28:00